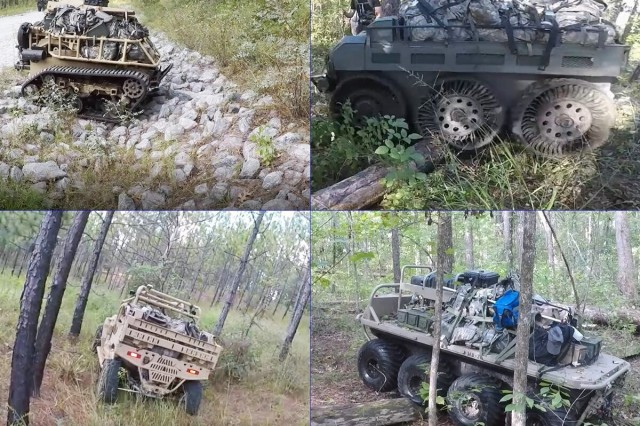 JUNE 5, 2020 – The Army plans to award a contract this month to produce hundreds of robotic mules that will help light infantry units carry gear, a product manager said last week, as part of a line of unmanned ground systems the service is developing.

The six-month assessment included 80 systems from four vendors that were evaluated during home-station training and rotations to the Joint Readiness Training Center at Fort Polk, Louisiana.

Soldiers successfully tested the performance of the robotic vehicles to ensure they could at least carry 1,000 pounds, operate over 60 miles in a three-day period, and generate a kilowatt when moving and 3 kilowatts when stationary to allow equipment and batteries to charge.

“We were able to demonstrate that and got lots of Soldier feedback,” said Lt. Col. Jonathan Bodenhamer, product manager of Appliqué and Large Unmanned Ground Systems, which falls under the Program Executive Office for Combat Support and Combat Service Support.

The S-MET will begin to be fielded in the second quarter of the next fiscal year, with a total of 624 vehicles in Soldiers’ hands by the middle of fiscal 2024, according to the U.S. Army Acquisition Support Center.

“Soldiers think outside the box,” Barnwell said of the importance of their input during last week’s Future Ground Combat Vehicles virtual conference.

“This is important because this shows one of the linkages between robotics efforts,” he said, adding his office often discusses plans across the Army’s robotics community to prevent replication. “Modular mission payloads is a great example of that synergy.”

In April 2019, the Army held a weeklong demonstration with the add-on payloads at Fort Benning, Georgia, to explore ways to enhance the effectiveness of the S-MET.

“Obviously there’s a lot of potential here for the Robotic Combat Vehicles to use some of this, too,” he said, referring to the light and medium RCV variants. “They’re looking closely at the efforts we’re undertaking with these MMPs.”

Requests for information have already been sent out to industry for two MMP capabilities: counter-unmanned aerial system and another for enhanced autonomy.

“We are going to try to quickly get these things out to Soldiers and let them see which ones do and don’t meet their needs,” he said, “and then hopefully procure a quantity of these payloads to further enhance the capability of the S-MET.”

The Army also completed an assessment in March on the Nuclear Biological Chemical Reconnaissance Vehicle, or NBCRV, a modified Stryker vehicle with chemical detection sensors.

Manned-unmanned teaming operations “extended the range, the area of coverage and reduced the risk to the crew and enabled faster reporting of [chemical, biological, radiological and nuclear] hazards,” he said.

The requirement for the Assault Breacher Vehicle Teleoperation Kit, which is built on an M1A1 Abrams tank chassis, is also set to be finalized this summer after being tested in last year’s Joint Warfighting Assessment.

The kit allows the two-person crew to step out of the vehicle and remotely control it during dangerous breaching operations.

While the gun tube of the tank is removed, it can still launch mine clearing line charges and includes a lane marking system and front-end plowing attachments.

“It’s a great use of teleop,” Bodenhamer said. “Probably the best use we’ve ever come up with, in terms of how it fits into the overall impact of bringing the unmanned operation of a platform into the Army.”

“These systems are going to have to be able to do more and more on their own to enable the human operators to focus on the big picture,” he said.

A tank commander, for instance, may need to order a few robotic “wingman” vehicles to drive themselves to a waypoint, avoiding obstacles along the way.

Or, a helicopter pilot may require a UAS to detect and destroy air defense systems ahead of him before arriving to a specific location, he said.

“We’re not talking Skynet,” he said, referring to The Terminator film. “We’re talking about simple things that these systems are going to have to do to enable us as warfighters to operate more efficiently.”