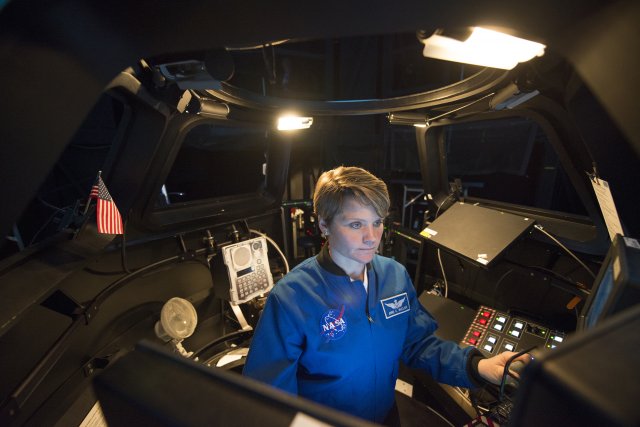 NOVEMBER 15, 2018, Fort Meade, MD – A month after a Russian Soyuz rocket carrying a two-person crew failed in midair, an Army astronaut slated to head into space remains confident in her crew’s upcoming launch.

Lt. Col. Anne McClain, who is part of the Army Space and Missile Defense Command’s small astronaut detachment, is currently in Star City, Russia, in preparation for a Dec. 3 launch of another Soyuz rocket to the International Space Station.

“I am so happy that I’m going to have six months in space,” McClain said Friday during a teleconference press briefing. “We’re not just going to space to visit, we’re going to go there to live.”

McClain joined the NASA’s human spaceflight program after being selected to the program in 2013, along with another Soldier, Col. Drew Morgan. His space mission is slated for July.

If her launch goes as planned, she will be the first active-duty Army officer to be in space since 2010. Her three-person crew is expected to launch from Kazakhstan aboard a Soyuz MS-11 spacecraft and rocket.

McClain, 39, of Spokane, Washington, will serve as a flight engineer for Expedition 58/59.

Once in orbit, the West Point graduate said about half of her crew’s time will be spent on maintaining the space station.

The station is also a laboratory with more than 250 experiments, which McClain and others will help oversee. She will even participate in some of the experiments, including one that evaluates how human bones are regenerated in a microgravity setting.

“That will be an interesting one to see the results of,” she said, adding many astronauts suffer from bone loss since they use less weight during extended spaceflight.

Preparing to go into space has been a difficult challenge that the former rugby player has tackled over the past year and a half. During that time, McClain has conducted specialized training from learning how to do spacewalks, station maintenance, robotic operations, and even speaking the Russian language.

“Everybody needs to be a jack-of-all-trades,” she said.

In June, she served as a backup astronaut for the crew that is currently at the space station. Now in Russia, McClain and her crew is doing some final training on the Soyuz launch vehicle.

While her crew prepares to lift off on a similar type of rocket that suffered a malfunction Oct. 11 and triggered an automatic abort, McClain is still not worried.

The Soyuz rocket, she said, has had an amazing track record. Before last month’s incident, the rocket’s previous aborted mission was in 1983.

“I saw that Oct. 11 incident, not as a failure, but as an absolute success,” she said. “What this really proved was that the Russian launch abort system is a really great design and for that reason we have that backup plan.

“Bottom line is that I would have gotten on the Soyuz rocket the next day.”

Her crew also received a debriefing from both astronauts in the aborted mission — Nick Hague and his Russian counterpart, Alexey Ovchinin.

Hague, an Air Force colonel, explained to them the forces he felt and saw when the launch abort system kicked in.

“Our whole crew sat down with Nick and got his impressions,” she said. “I think he helped us get ready and we adjusted a few things for our launch.”

She also gave her friend a hug and jokingly told him that the next time they saw each other was supposed to be in space.

“When I gave Nick a hug goodbye before his launch, we kind of said, ‘Hey, the next time we hug it will be on the space station,” she said, smiling. “When I saw him again, I gave him a hug and I said, ‘Hey, we’re not supposed to have gravity right now. But I was happy to see him.”

Because of the recent mishap, believed to be the result of a manufacturing issue with a sensor, McClain’s mission was moved up to next month.

“We’re confident that particular issue won’t happen again,” she said. “But the important thing that we’ve learned from all incidents in spaceflight in the past is that you can’t just look at that one part because there’s a billion other parts on that rocket.

“You have to make sure what caused that particular part to fail is not being repeated on other parts. And they’ve absolutely done that.”

Her crew plans to relieve a three-person crew currently at the space station. Based on the life of their vehicle, that crew needs to return by the end of December, she said.

The quicker she can get into space, the better for McClain.

“I’m just excited for the experience,” she said. “What I do hear from many astronauts is that as soon as you look back at the Earth and all of its glory and realize how fragile it is, you’ll never be quite the same. I’m looking forward to those moments.”