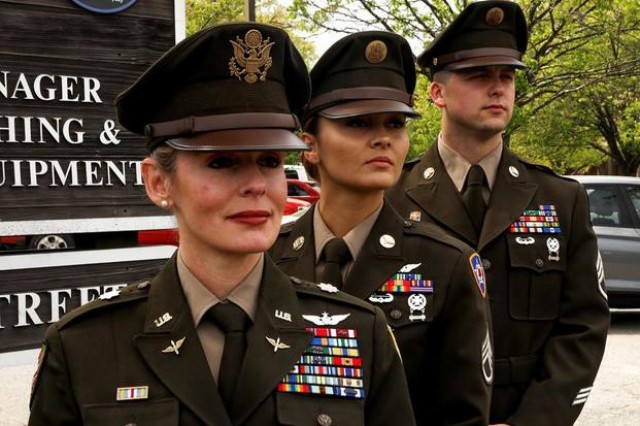 AUGUST 13, 2020 – Along with their iconic round brown hats, drill sergeants will soon be donning the Army’s new, long-awaited everyday business uniform, a project manager confirmed Tuesday.

The Army Green Service Uniform, which is based on the dress uniform worn by Soldiers during World War II, will be delivered to basic combat training drill sergeants at Fort Sill, Oklahoma; Fort Benning, Georgia; Fort Leonard Wood, Missouri; and Fort Jackson, South Carolina, later this month with general sales at those installations’ post exchanges beginning this fall.

The full wave of AGSU sales throughout the Army is slated to be implemented by March 2021.

Trainees in basic training and one-station unit training are scheduled to begin receiving the new uniform starting from October through December. Soldiers must fully transition to the new uniform by Oct. 1, 2027.

“The everyday professional look of the AGSU will complement Soldiers of today and in the future,” said Col. Stephen Thomas, project manager of Soldier survivability for Program Executive Office Soldier, during a media event Tuesday.

With its olive-colored top and light brown trousers, a similar dress uniform gave Soldiers a unique look during WWII. Army senior leaders pushed for a revamped design to connect today’s Soldiers with the service’s past.

Former Army Chief of Staff Gen. Mark A. Milley met with designers at the Army Combat Capabilities Development Command Soldier Center in Natick, Massachusetts, in 2017 to discuss possibilities for a new service uniform. The command’s design team fashioned uniform options for Milley and made recommendations to PEO Soldier.

“[Milley] spoke of the pride and heritage of that uniform in our Army’s history and wanting to bring it back,” said Annette LaFleur, design team lead at CCDC Soldier Center. “He wasn’t very specific in terms of the exact design detail. He just spoke about the fit, the aesthetic, and the look of it and uniting everybody together with this uniform.”

Extensive testing followed with as many as 1,200 test uniforms worn by Army recruiters and 700 prototype models used during a limited-user test last year. For nearly two years, Milley and former Sgt. Maj. of the Army Daniel A. Dailey campaigned for the new uniform, even donning the AGSU at nationally-televised events such as the annual Army-Navy game.

The updated service uniform is intended for all Army ranks, while the WWII-era uniform was only authorized for officers to wear. The average cost varies depending on the combination of clothing, but the standard price hovers around $500 per uniform. The yearly clothing allowance, which officers do not receive, will help cover the cost of the uniform for enlisted Soldiers.

The shelf life of the clothing will span six years — two years longer than the Army Service Uniform, or commonly known as Dress Blues.

LaFleur added that designers adjusted the original WWII design for everyday wear. The uniform is made from a high quality, wool blend designed to make it last longer.

“Designers put together illustrations of different design options for various coat styles. These were early concepts where we started thinking about how we could actually modernize the designs,” LaFleur said. “The current configuration of the uniform really is very close to what you would have seen during the World War II-era. It really speaks back to that heritage and we haven’t changed that much in terms of the aesthetics of the uniform.”

Brown jump boots will eventually be added as options and prototypes are still being tested, Thomas said. Like its predecessors, the uniforms will have options for women, who can choose between trousers and knee-length skirts. An all-female board helped design the intricacies of the female AGSU.

In addition to a different color scheme, the AGSU has curved pocket flaps and a more rugged look than the Army Service Uniform, which the AGSU will eventually replace.

To accelerate delivery, Army & Air Force Exchange Service, or AAFES, used Army funds to directly procure the initial run of the new uniform at the Army’s request. In July, AGSUs were issued to about 70 Army Recruiting and Retention College students at Fort Knox, Tennessee.