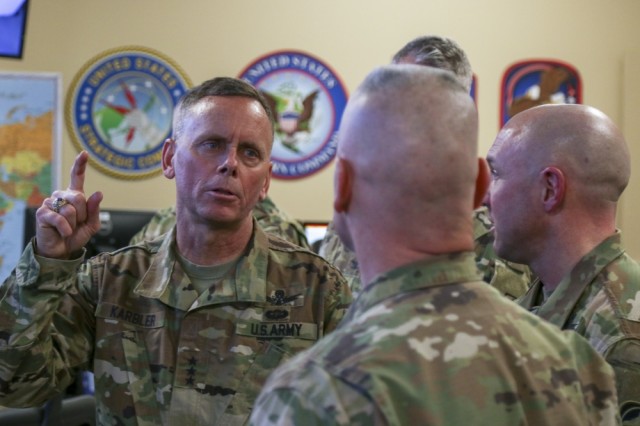 MARCH 9, 2020 – A wrecked drone sits on the desk of the Army’s senior air defender after being shot down during a test at Redstone Arsenal, Alabama, a few weeks ago.

The pile of vaporized plastic is evidence of the firepower behind the Army’s cutting-edge, drone-blasting laser technology.

“Our adversaries are challenging us in the space domain,” Lt. Gen. Daniel L. Karbler, commanding general, U.S. Army Space and Missile Defense Command, said to a group at the Association of the U.S. Army’s “Hot Topics” forum Thursday on space and integrated air and missile defense.

“We’ve got to be able to address the threats that are out there, that the adversaries have presented,” Karbler said.

The debris was also part of a friendly rite of passage for Karbler, who took the helm in December from his predecessor, Lt. Gen. James Dickinson, the current deputy commander of the United States Space Command.

Both generals were equipped with an X-Box controller when they fired a 50-kilowatt laser into the sky and wiped out a drone mid-flight, but this wasn’t an Army Esports game. The hands-on approach helped the leaders understand where directed energy technology is going.

“It was pretty darn awesome,” Karbler said. The technology is also currently in the hands of cadets at the U.S. Military Academy at West Point, as part of the Directed Energy Professional Symposium.

Although laser weapons may conjure images of futuristic ray guns in Star Wars films, this kind of engineering is a reality for the Army, as the force strives to continue to outpace near-peer adversaries on a modernized battlefield.

By 2022, the Army hopes to field its first 50-kilowatt lasers on Stryker armored vehicles. The following year, a battery will be fielded with the Army’s new land-based hypersonic weapon.

Throughout Karbler’s 32-year career, SMDC has “never been more relevant,” he said.

Although just 90 days in his role, Karbler is no stranger to space-based warfare.

For example, when Russian satellites threatened U.S. space assets or when 15 Iranian missiles were launched into Iraq earlier this year, it was while Karbler was commanding SMDC.

In January, two U.S. military targets in Iraq were fired at by Iranian forces. The attack ended in zero causalities, he said, largely due to the efforts of SMDC’s 1st Space Brigade.

“The 1st Space Brigade provides those maneuver commanders all the space capability they have to have from theater early warning, and missile warnings,” Karbler said. “They were key to making sure an early warning was provided to our Soldiers during those Iranian attacks, which is why we didn’t have anybody killed.”

SMDC will continue to reshape the battlefield, as next-generation interceptors, hypersonic missiles, and more directed energy weapons are on the way, he said, as hypersonics research nearly doubles in fiscal year 2021 and triples for lasers.

For Karbler, integration is essential to reshaping the future of warfare. As the USSPACECOM breaks ground, the rest of the military is aligning its efforts to the battlefield beyond Earth.

“We have militarized space — but it is because our adversaries have weaponized it — and are behaving just like they do in other warfighting domains,” Dickinson said, also at the AUSA event. “The lack of visible threat makes some believe [a threat] doesn’t exist.”