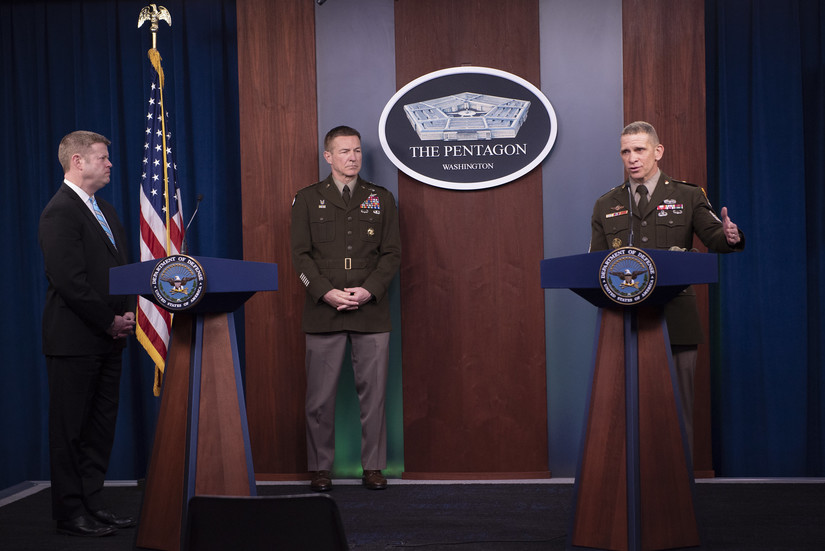 APRIL 17, 2020 – With nearly 1,000 soldiers now tested positive for the COVID-19 coronavirus, the Army is continuing to ramp up its testing efforts, particularly for new recruits at training posts.

Starting next week, one of the Army’s largest training posts — Fort Jackson, South Carolina — will be able to conduct about 700 tests each day for the virus after receiving new machines to increase its throughput.

In a Pentagon briefing yesterday, Army Chief of Staff Gen. James C. McConville said he visited the installation the day before to see how soldiers were training under new safety measures.

“We have not stopped training,” he said. “During the training, they were 6 feet apart and they were either wearing masks or gaiters when they got closer. So we’re going to see this type of training continue to happen.”

When recruits now come to training posts, they are screened and placed in what he described as a “safety bubble” environment to minimize exposure to other soldiers while they train with their cohort.

“That’s how we will keep the spread of the virus down,” he said.

Earlier this month, the Army halted the movement of new recruits for two weeks to basic combat training posts, such as Fort Jackson, to slow the spread of the virus. The extra time allowed training posts to build up testing capabilities while also carrying out basic training and advanced individual training courses in a limited capacity, which has included smaller classes and social distancing.

Sgt. Maj. of the Army Michael A. Grinston also recently traveled to Jackson, as well as Fort Lee, Virginia, to see trainees in action. He said the training was “still executed to standard.”

Grinston said he was also impressed with how trainees with symptoms of COVID-19 were sent to a separate facility at Fort Jackson so they could be quickly tested away from other trainees.

“They get the results right there on Jackson,” he said. “It’s an extremely well-done process.” Before mitigation efforts were in full force, a training battalion at Fort Jackson recorded a handful of positive cases, leaders said. But with the safeguards and additional testing in place since mid-March, the spread of the virus has been contained and training goes on to maintain readiness.

Testing capabilities for the virus have also been increased across the Army. Initially, the Army had nine medical centers with a large testing capacity, which has since expanded to 35 installations to provide testing locally, Lt. Gen. Scott Dingle, the Army’s surgeon general, said. And if cases go up, the Army has the ability to send testing capabilities elsewhere, or even use local or state testing sites.

“Right now, in the Army, we do have enough tests,” Dingle said. “However, as we test [more people], they’re going to have to be replenished.”

Identifying service members who have been asymptomatic with the virus has also been a challenge across the Defense Department. DOD is pursuing different types of diagnostic capabilities, such as serologic testing that can assess a patient’s blood for the presence of COVID-19 antibodies.

“That ability will allow us to consistently test more, so we can identify those individuals,” Dingle said. “In the meantime, we must [carry out] the mitigation measures to ensure we protect the forces.”

The Army’s medical research community also is working on the development of vaccines as part of the prevention efforts. It is currently testing vaccine prototypes in small animals before selecting a candidate for safe testing in humans this summer, Army Secretary Ryan D. McCarthy said.

“The Army is fighting the virus on multiple fronts,” McCarthy said. “From medical support efforts in our cities to searching for a vaccine in order to stay ready, so we can continue to be the Army the nation deserves.”