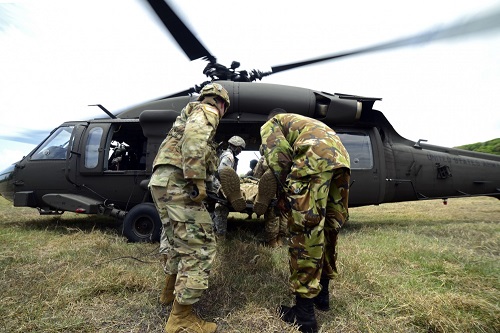 AUGUST 23, 2017, WASHINGTON – As the Army service component command to SOUTHCOM, Army South enhances partnerships by pursuing strategies of active, principled engagement as part of a networked approach, such as PANAMAX 2017.

“The bottom line is that it’s important we train together, we know each other and we trust each other,” said Maj. Gen. K.K. Chinn, U.S. Army South commander. “There’s a lot that we can learn from our partner nations and it’s important to have regional solutions to regional problems.”

As part of that networked approach, U.S. Army South participates in the PANAMAX 2017 exercise, which includes training for many of the 21st-century threats encountered in today’s land, sea, air and cyber environments. The aim of the exercise is to increase the ability of nations to work together, enable assembled forces to organize as a multination task force, and test their responsiveness in combined operations.

In total, 17 nations joined the United States during the exercise, which ran from August 12 to 16 at multiple U.S. military bases including Fort Sam Houston; Mayport, Florida; Davis-Monthan, Arizona; and Homestead Air Force Reserve Base, Florida.

The SOUTHCOM area of operations is a large and diverse region encompassing 31 countries and 16 dependencies in Central and South America, and the Caribbean. Nearly 500 million people speaking over 100 languages and dialects inhabit the region. This makes it nearly impossible for any one nation to successfully confront regional challenges on its own.

Although PANAMAX 2017 focused on security of the Panama Canal, the benefits of the exercise go much deeper, according to Chilean Brig. Gen. Andres Fuentealba.

“This is a very important resource for maintaining readiness,” said Fuentealba. “We not only participate with these countries in exercises, but in real-world events. For example, in Chile it’s common to have earthquakes, volcano eruptions, tsunamis and mud slides and Chilean military forces have to be ready to work with other countries. This exercise is not far from real life situations since our forces don’t work by themselves, but are always interacting with someone else.”

Fuentealba explained that active engagement with partner armies is key in remaining ready to meet the ever-changing challenges of today and tomorrow.

“Every country and every person has something to contribute to the exercise,” said Fuentealba. “There are different levels of experience within each country and our main objective is to get to know each other’s capabilities, integrate those capabilities and work together.”

“It’s an exercise to work on our joint interoperability and it’s really about relationships,” said Chinn. “With mutual trust anything is possible and we know we can be successful wherever we go and fight in the world.”

The PANAMAX exercise series has grown dramatically since 2003 when the U.S. Army conducted the first exercise together with Panama and Chile.

“It’s not the first time we get together, and the trust has been generated for many years,” said Fuentealba. “Every year the PANAMAX exercise gets better and better.”

Army South conducts numerous exercises and operations, such as PANAMAX, which provide high-level training opportunities for the service members and partner nations. Future exercises will build upon this training to ensure they are prepared to deploy and conduct contingency operations together.