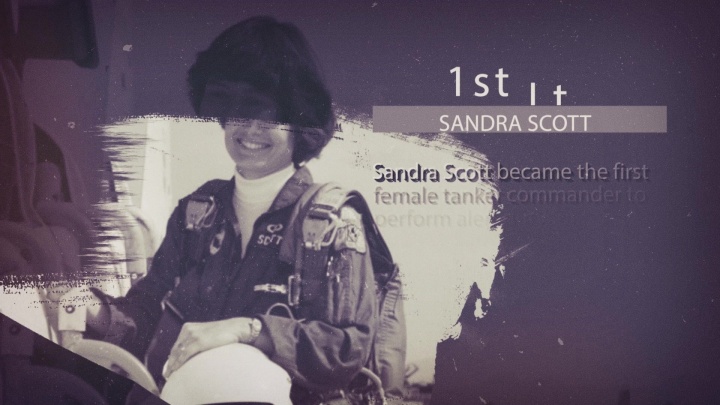 Located in the AETC headquarters, the newly renamed Trailblazer Room was dedicated to the first 10 women who earned their silver wings, Sept. 2, 1977.

“The women of class ‘77 – ’08 truly broke barriers,” said Lt. Gen. Brad Webb, AETC commander, who presided over the ceremony. “They lived the fact that glass ceilings were a reality simply because they were women. These trailblazers paved the way for future generations of female pilots and their influence on our Air Force is still felt today.”

In 1975, then-Air Force Chief of Staff Gen. David C. Jones, announced the launch of a test program that would enable women to enter pilot training and staff a now all-volunteer force after the abolishment of the military draft following the Vietnam War.

“This was the first time, nearly three decades after the birth of the Air Force, that women were allowed to join the service as equals to men and enter pilot and navigator career fields,” Webb said. “This dedication will serve as a reminder for all of us of the courage these female pioneers showed while shattering those glass ceilings.”

Sept. 26, 1976, these 10 women, alongside their 35 male classmates, began UPT at Williams Air Force Base, Arizona, and cemented their place in history.

Accumulating more than 210 flight hours in the T-37 Tweet and T-38 Talon, they successfully completed UPT and went on to achieve more historical feats in their Air Force careers that pioneered future generations of women to follow.

Mary E. Donahue
Donahue became the first woman to serve as an instructor pilot assigned to the U.S. Air Force Academy, where she taught senior cadets to fly the T-41 trainer and was an educator in the department of mathematical science.

Susan D. Rogers
Flying a C-141 Starlifter, Rogers evacuated victims of a bombing attack on a U.S. Marine Corps barracks in Beirut, Lebanon on Oct. 23, 1983. She died of cancer in 1992 and left behind a legacy of excellence.

Christine E. Schott
Schott was the first woman to solo in the Northrop T-38A Talon at Williams AFB, Arizona.

She later became the first woman to qualify and serve as an aircraft commander on the C-9A Nightingale medical transport and command its first all-female aircrew.

Connie J. Engel
Engel, the class leader, was the first in her class to solo in the T-37 Nov. 30, 1976, earning her one of the three Distinguished Graduate awards, the Officer Training Award for exhibiting “high qualities of military bearing and leadership” and the Air Training Commander’s Trophy as top graduate.

Following graduation, she became the first female T-38 instructor and flew the T-38 chase for the space shuttle program.

Kathy LaSauce
LaSauce became the first female pilot to command a C-141 and the first woman to serve as a presidential support pilot.

“I loved aircraft maintenance,” LaSauce said. “I loved working around airplanes. When pilot training opened for women, I knew that was what I wanted to do.”

Although LaSauce’s interest in becoming a pilot was not met with optimism by society, she did so anyway.

She joined Air Force ROTC at Oregon State University in 1970 after school officials had opened the program to women only a year prior. Following her commissioning in 1973, she was stationed at Tyndall Air Force Base, Florida, for weapons controller training where she was first exposed to aviation.

After completing her first assignment, she went to King Salmon Air Force Station, Alaska, where she met pilots who were conducting alert missions. When the Air Force announced its test program, she applied and was accepted.

“My parents infused in me the idea that it wasn’t about me being a woman,” Scott said. “It was that I had abilities and that I could use those abilities to accomplish anything.”

In spite of the women’s accomplishments during pilot training, they faced disparaging public opinion.

Some male flight instructors opposed the test program and didn’t believe women should fly; a position they expressed openly during training.

LaSauce recalled a time when an instructor told Livingston, “I don’t know why I’m teaching you how to fly the T-38 because you’ll never be a fighter pilot.” LaSauce said her flight commander shared the same sentiment, stating that if he had his way, none of the women would graduate.

In the face of these unique challenges, they knew that the future of women in aviation rested on their success.

“Women would not be flying combat missions, flying fighters or commanding flying squadrons if we didn’t succeed,” LaSauce said. “We knew in our hearts we needed to do well.”

Although it was another 30 years before women were allowed to fly in combat missions, the 10 trailblazers forged a path for the women who followed.

“About a year later, female astronauts began training at Vance Air Force Base, Oklahoma,” said Gary Boyd, AETC command historian. “The success of the group ushered in the modern era of military aviation.”

Decades later, the stories and the historical feats of each of the women from UPT classes ‘77 – ‘08 were honored.

“It warms my heart that Air Education and Training Command decided to tell our story,” Scott said. “It’s the story of women who broke barriers.”

“There is no denying the trailblazing women of class ‘77 – ‘08 were set up in such a way that failure would have been easy,” Webb said. “But that’s not what Airmen do. Through grit and determination not only did they succeed, they excelled.”