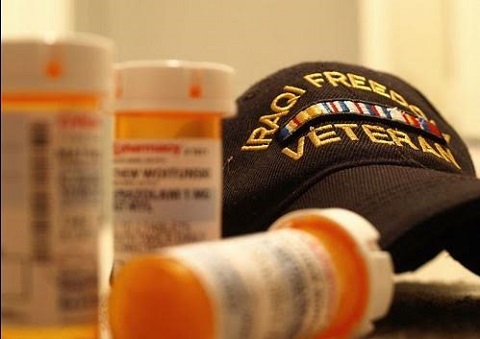 October 23, 2015, by Brooke Chaplan – Smoking, alcohol, prescription drugs, and illegal substances are often considered a crutch for a bigger underlying problem. In the case of returning veterans, it is a historical fact that war and drugs go hand in hand. How then, can we expect a decrease in substance abuse in our military heroes of today?

History of War and Drugs

As early as the Civil War alcohol and tobacco have been regular staples, along with morphine, than amphetamines, in World War II. Marijuana and heroin were big players during the Vietnam War. And although society may have gained much insight into the mental and behavioral problems of returning servicemen, there has been no decrease in substance abuse today. In fact, recent statistics show it is on the rise.

Post traumatic stress disorder and traumatic brain injury have also increased in recent years. Perhaps they have been present all along, but had no clear cut diagnosis. In treating these disorders, physicians rely on opiates that are very addictive. Suddenly, we have another type of substance abuse to add to the list. There is little argument that many of our servicemen have suffered a large degree of trauma and pain, but is adding another addictive drug to the mix really the answer? According to the Veterans Administration, over 500,000 veterans are being prescribed opioids for mental and physical problems due to the wars in Iraq and Afghanistan.

Are we fixing a Growing Problem?

More stress and anxiety affecting returned veterans is a big part of the problem, since many of them see one of the only ways to gain relief is through controlled substances, illegal drugs, or alcohol. In the midst of veterans battling the scars of war, the DEA began restricting opioid use, the VA merged medical treatment centers, and government benefits were cut to servicemen and women. It has become harder for these military men and women to relax and recover with all these new changes and restrictions taking place.

They say you have to identify a cause in order to treat a problem. It has been over a decade since PTSD has been a diagnosed illness, but treatment methods thus far have only worsened the problem by masking symptoms. This is evident by looking at the increased suicide rate of veterans. It is time to use treatment plans that work, and stop furthering the problem. Although the VA offers programs to deal with mounting diagnosis of PTSD and addiction, the system does always offer the help that is needed. Long waiting periods, overworked medical personnel, and lack of funds have caused turmoil in already stressed out vets.

Recently, retreats geared toward helping veterans with addiction have started to emerge in the private sector. Waiting on the government to provide adequate care for our returned service members are placing many families in turmoil, and driving some to suicide. If you know of a veteran that is suffering or addicted, it might be time to set up a drug intervention. What is an intervention? It’s a gathering set up either through close friends and family, or through an intervention service that confronts an addict and urges them to seek help. Through inpatient and outpatient services, many service men and women are taking control of their lives, and learning how to realistically readjust back into society.