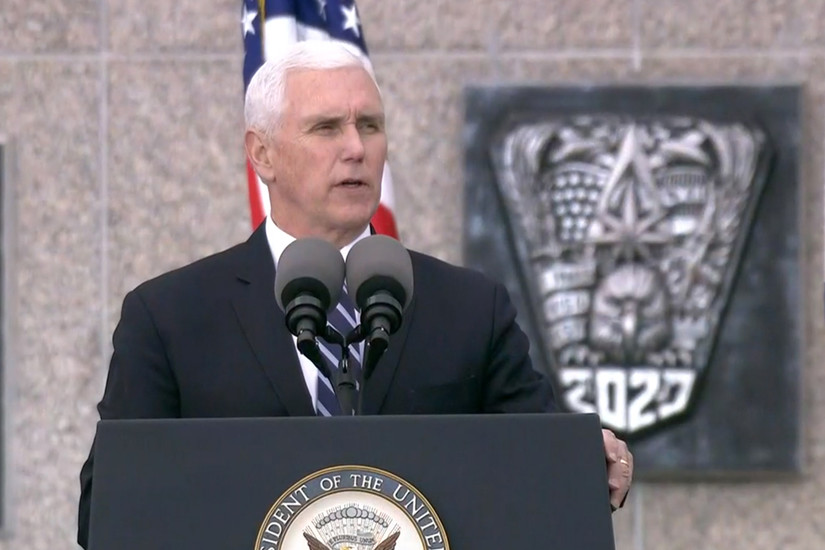 No families or friends were allowed to attend today’s event.

Pence congratulated the academy’s 62nd graduating class, saying he wouldn’t want to be anywhere else but at their graduation.

“We gather at a time of national crisis as the coronavirus epidemic impacts our nation and the wider world,” he said. The American people, as well as members of the armed forces, have met this challenge with courage, resilience and strength, the vice president added.

Defense Secretary Dr. Mark T. Esper, speaking from the Pentagon, congratulated the cadets. He said he expects the cadets to embody the values they learned at the academy: “integrity first, service before self and excellence in all you do.”

“Aim high, and congratulations,” the secretary told the graduating class.

Army Gen. Mark A. Milley, the chairman of the Joint Chiefs of Staff, also congratulated the cadets, speaking from the Pentagon.

“Your target is indeed in sight,” he said, “but your journey is just beginning. You will serve your country in a time of incredible challenge and increased complexity in the global strategic environment.”

The character of war is undergoing fundamental change, the nation’s top military officer said, noting that new technologies and radically new doctrines will emerge. “You will be the leaders who lead our country into a distant future,” the chairman told the graduating class.

The cadets’ graduation coincides with the famed Doolittle Raid of World War II, 78 years ago, Goldfein noted. It was likely a one-way mission against the Japanese during World War II, he said. Before the mission, Army Air Force Lt. Col. Jimmy Doolittle encouraged his airmen to step back from the mission with no repercussions if they so desired. None did, Goldfein said.

Raymond said this is the first class of academy graduates that includes some who will enter the Space Force, calling it a very significant milestone.

The graduation was moved up from May 28 to allow the class to celebrate together, albeit with social distancing, ensuring their health and safety by adhering to Centers for Disease Control and Prevention and Defense Department guidelines on preventing the spread of COVID-19.