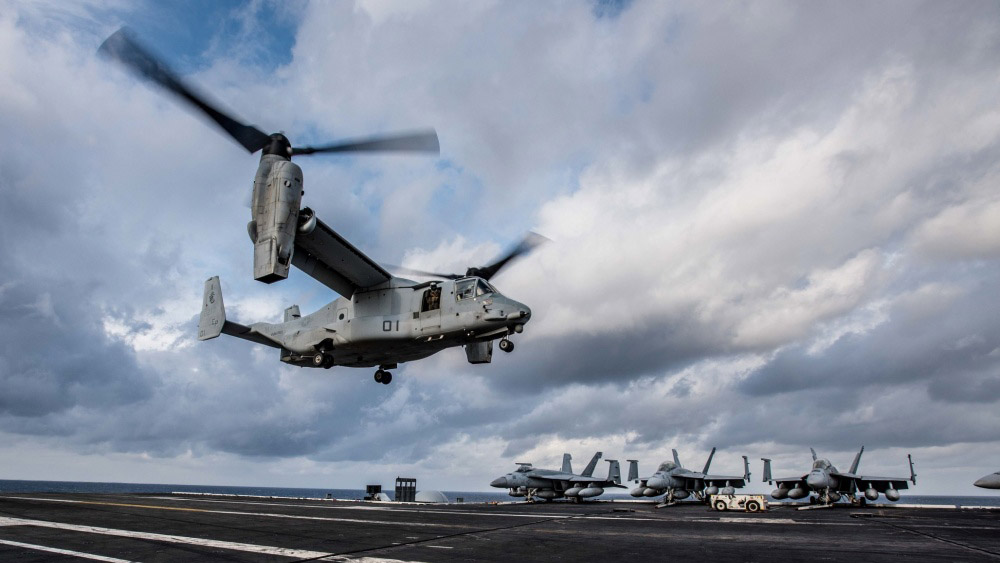 DECEMBER 1, 2017 – Camp Foster, Okinawa, Japan – From the time when the U.S. Navy began, groups of specifically trained, maritime infantry have accompanied them.

Since November 10, 1775, when Congress approved the establishment of two Marine battalions, as America’s expeditionary force in readiness, the U.S. Marine Corps has teamed with the Navy to form an irreplaceable expeditionary force whose mission remains crucial to the security of the U.S.

Marines with Marine Medium Tiltrotor Squadron 265 (Reinforced), Marine Aircraft Group 36, 1st Marine Aircraft Wing, provided aerial support with MV-22B Ospreys to the Sailors of Atsugi Naval Base and the USS Ronald Reagan through the transportation of personnel, aircraft maintenance parts and other cargo.

“VMM-265 (Rein.) is always postured to help when our leadership tasks us to any military unit or service in need, whether to enable training or during times of internal need such as [Carrier Air Wing Five] and the [USS Ronald Reagan],” said Maj. Geoffrey “Finkle” Blumenfeld, VMM-265’s (Rein.) operations officer.

The Marine Corps being a fighting force, first and foremost, Marines do not recruit or train noncombatants such as chaplains, medical, or dental personnel, but the Navy fill these roles. Naval personnel have been assimilated with the Marines since the beginning.

Navy Corpsmen have rushed into battle alongside Marines since the Navy Hospital Corps establishment on June 17, 1898. Supporting Marines in every conflict, from the Spanish-American War to Operation Inherent Resolve, hospital corpsmen have been providing medical support and saving Marine’s lives on the front lines.

Marines and Sailors even share many naval traditions, especially terminology and customs.

Marines work on “decks” (floors), look out of “portholes” (windows), and walk through “hatches” (doors) just as their brethren, Sailors. The Marine Corps wears the Navy variant of many awards; with few exceptions, the awards and badges of the Navy and Marine Corps are identical.

The Navy continues to partner with the Marines in creating rich history, such as the Iwo Jima flag raising with the five Marines and Navy corpsman.

The dynamic relationship between the two organizations assisted Marines to earn the reputation as America’s 911 force and with the Navy ships, allow them to respond to a wide range of military operations, from humanitarian assistance missions to combat operations, at a moment’s notice, not only in the Asia-Pacific region, but around the globe.

“[VMM-265’s (Rein)] hearts are with Carrier Air Wing Five and the USS Ronald Reagan and families of the aircrew during their time of mourning,” said Blumenfeld.