3/14/2012 – WASHINGTON (AFNS) — The Sexual Assault Prevention and Response Wing Commanders’ Guide was sent out to wing commanders recently and contains statistics, facts and talking points to help leaders encourage healthy conversations among their Airmen, which senior leaders say is paramount to eliminating sexual crimes in the Air Force.

“Inspiring our Airmen to be good Wingmen is not just a worthy undertaking, it is a critical mission enabling task that has hope of one day creating an Air Force without sexual assault,” said Secretary of the Air Force Michael Donley.

“America’s Airmen deserve nothing less than our full devotion to eradicating the threatening behavior to their well being,” said Air Force Chief of Staff Gen. Norton Schwartz. “This crime threatens our people and for that reason alone, it is intolerable and incompatible with who and what we are.”

“Empowering Airmen to intervene when their peers are in trouble is a key component of our training,” explained Chief Master Sergeant of the Air Force James Roy. “We want our Airmen to understand they can make a difference by recognizing when their Wingman is at risk for making a poor decision.”

Bystander intervention training was introduced in 2008 and the Air Force expects completion of this training for all Airmen by the end of June. 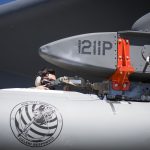