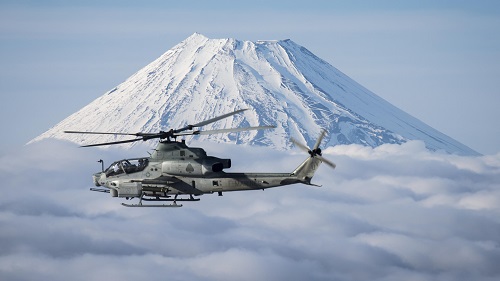 The helicopters demonstrated a 25% range increase, according to Capt. Christopher Millar, a UH-1Y Venom pilot with HMLA-267, a squadron deployed to Okinawa from Camp Pendleton, California.

“This allows us to support the Marines of III MEF as we project our power further and increase our capability with the fuel tanks,” said Millar, who is supporting Marine Air Group 36, 1st Marine Aircraft Wing, III MEF, through the unit deployment program.

Millar flew one of the helicopters that broke the record, logging 314 nautical miles during a flight from Marine Corps Air Station Futenma, Okinawa, to New Tanegashima Airport, Japan, March 10.

Lt. Col. Jon Livingston, the commanding officer of HMLA-267, confirmed that this was the longest recorded Venom or Viper flight ever.

“The auxiliary fuel capability gives the Marine Air Ground Task Force commander the ability to respond to crises and deploy our forces from the most northern reaches to southern reaches of the area of operations,” said Millar, a native of Saint Louis.

Once the H-1 helicopters arrive at their destinations, they can easily drop their fuel tanks and reconfigure for ordnance operations. The fuel tanks, which resemble torpedoes, attach below both sides of the helicopter bays.

“The auxiliary fuel systems provide the MAGTF commander scalable options to be able to move his assets around the area of operations without relying on strategic lift,” said Millar.

“With these auxiliary fuel tanks, I believe it gives H-1’s a greater ability to self-deploy and to help the Marines on the ground,” Millar said. “[The H-1’s] also help III MEF fulfill the ‘Fight Tonight’ motto and project our power further ashore.”