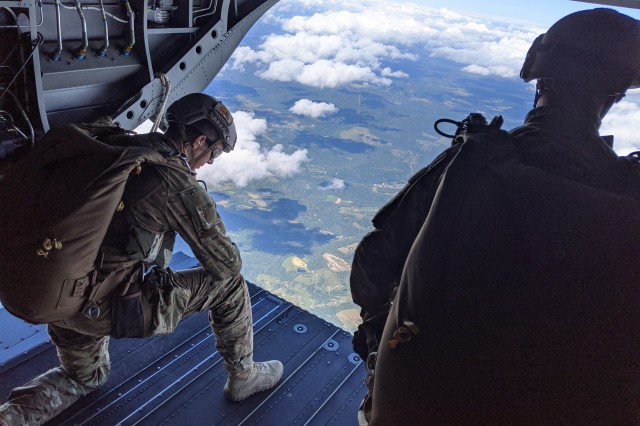 The paradrop mission included a High Altitude Low Opening (HALO) military free fall jump for the West Virginia Green Beret Soldiers. The jumpers left the helicopter at high altitude, went into a free fall and deployed parachutes around 4,000 feet above the ground.

This style of parachute insertion is ideally suited to the infiltration techniques of the Special Forces Soldiers.

The New York aircrews assigned to Detachment 1, Bravo Company, 3rd Battalion of the 126th Aviation Regiment are based at the Army Aviation support Facility in Rochester. They flew to West Virginia to facilitate the training and train the aircrews on the high altitude techniques.

For the heavy lift aircrews, the opportunity highlights their role as an aviation unit to support ground forces, according to 1st Lt. Jonathan Peralta.

Events like this give exposure to the Chinook aircraft and its capabilities, making coordination with other states or units possible, Peralta said.

The West Virginia Guardsmen are Special Forces Soldiers assigned to Bravo Company, 2nd Battalion of the 19th Special Forces Group. The jump was a training requirement so they could maintain their airborne proficiency.

The New York aircrews also got valuable training too, Peralta said. They had to work closely with the Green Beret jumpmaster to ensure the safe exit of jumpers at the appropriate altitude and location.

“The aircrew was great and was very accommodating to our unit,” Grady said.

The New York crews flew to West Virginia to a predetermined drop zone. Once on the ground, they were able to conduct inspections, coordinate briefings, and conduct rehearsals prior to departing for the free fall exercise.

Once both units were ready, the Special Forces Soldiers loaded up onto the aircraft. Pilots then took the aircraft to 11,000 feet altitude and made sure that the Chinook was in position for the jumpmaster to view the drop zone.

Once the jumpmaster verified the drop zone and a safe exit, the 15 Soldiers exited the aircraft to execute their jump.

Having passengers on board makes a tremendous difference, making for realistic training with real consequences for aircrew actions, explained pilot 1st Lt. Jeffrey Tampe, who was flying his first paradrop mission.

The Green Berets were extremely professional and motivated to work with, making the flight training run smoothly and safely, Tempe added

“We hope to work with them in the future,” Tampe said.

The Chinook detachment from New York takes part in similar missions to support ground forces from other states and even other countries, Peralta said.

For the past five years, with the exception of this year, the New York Army National Guard provided aircraft to support the annual International Leapfest Competition located in Rhode Island. The event brings together international parachutists from around the globe for static line jumps.

The 2020 Leapfest had to be cancelled due to COVID-19. But despite the pandemic, the flight crew was eager to support West Virginia in this similar training mission.

Grady said that he is confident that they will work with the New York crews again.

“The aircrew was awesome and adjusted to our schedule,” Grady said, “They helped us out anyway they could to ensure we could get the jump off.”