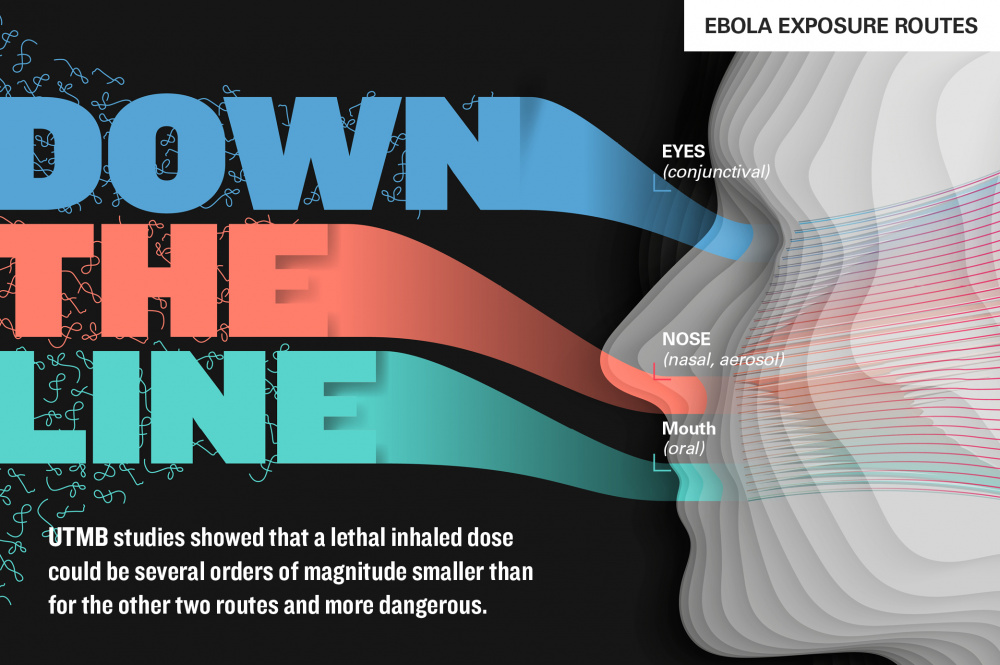 JUNE 24, 2021 – Identifying key pre-symptomatic biomarkers for the Ebola virus (EBOV) disease can lead to faster, more reliable detection and diagnostic testing, which will improve treatment and increase survivability for the warfighter. EBOV, also known as Ebola hemorrhagic fever, is a severe, often fatal illness affecting humans and non-human primates. The World Health Organization notes that case fatality rates varied from 25% to 90% in past outbreaks.

The Defense Threat Reduction Agency’s (DTRA) Chemical and Biological Technologies Department in its role as the Joint Science and Technology Office (JSTO) studied EBOV infection from different routes of exposure, assessing lethal dose amounts and biological markers (“biomarkers”) of infection. Biomarkers are detectable or quantifiable indicators of some phenomenon such as disease, infection, or environmental exposure.

Understanding the differences in the course of infection can assist efforts to identify and counter Ebola infection resulting from natural outbreaks or in situations where warfighters could be exposed to EBOV—either naturally, accidentally, or intentionally.

Researchers at the University of Texas Medical Branch at Galveston (UTMB) led a team that demonstrated EBOV infection from Zaire ebolavirus Makona strain of the 2014 outbreak. Breathing in the virus (an aerosol route) was far deadlier than infection resulting from eye (conjunctival) or mouth (oral) exposure routes. UTMB studies showed that a lethal inhaled dose could be several orders of magnitude smaller than for the other two routes and more dangerous.

The researchers also discovered pre-symptomatic biomarkers that identify EBOV infection before outward symptoms are present. These biomarkers offer information about the host’s response to infection and the pathogen activity and so they can be used along with signs and symptoms to make better healthcare decisions for the patient. Biomarker data can also influence the development of diagnostic and therapeutic countermeasures, a critical step toward rapidly diagnosing EBOV infection to improve outcomes through early intervention and supportive care.

In this study, researchers sought biomarkers produced during and because of EBOV infection by comparing transcriptomes—the set of ribonucleic acid products that are manufactured by an organism’s genetic material—from infected and non-infected hosts (a method called transcriptomics). Comparing healthy to infected transcriptomes can identify genes that are differentially expressed during stages of the infection, which is a key element of developing detection and diagnostic tools along with studying the natural history of the disease.