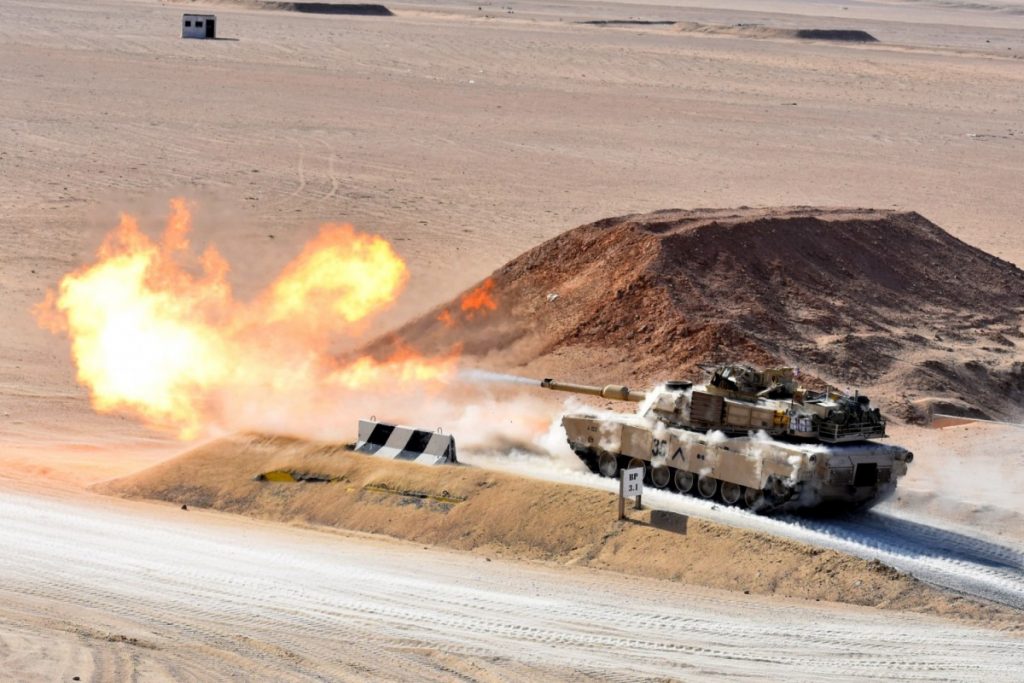 JULY 26, 2021 – Soldiers with the 30th Armored Brigade Combat Team overcame significant challenges to prepare and complete an 11-month deployment to the Middle East in support of Operation Spartan Shield, its commander said Wednesday.

Over a three-year span, the National Guard unit proved its durability by adapting to flooding in two locations, earthquakes in the training environment, and increased safety measures during the COVID-19 pandemic, Col. Charles W. Morrison told reporters during an Army Current Operations Engagement Tour.

“Our Soldiers overcame all this because they’re resilient, and they found innovative ways to accomplish their mission for both their state and their nation,” Morrison said.

The series of challenges started in 2018 after the 30th ABCT completed a significant training evaluation as part of the National Guard’s eXportable Combat Training Capability program, Morrison said.

In the wake of Hurricane Florence, the brigade returned home and more than 1,200 Soldiers were called up to state active duty to support rescue and recovery operations throughout central and eastern North Carolina.

After completing hurricane response efforts, the brigade had minimal time to prepare for a pre-deployment rotation at the National Training Center in 2019. According to brigade officials, more than 4,000 Soldiers and 3,000 pieces of equipment converged on Fort Irwin, California, to validate the brigade’s lethality through a series of land and air exercises.

As Soldiers conducted their training, two 6.3 and 7.1 magnitude earthquakes hit the area, Morrison said. Soldiers worked quickly to check their equipment before shipping it overseas. The 30th ABCT then relocated to Fort Bliss, Texas, to complete individual, crew, squad, and platoon-level tasks before their departure to Kuwait.

“Once we arrived in Kuwait in December [2019], millions of gallons of water fell from the sky in a 24-hour period,” said Maj. Benjamin P. Bagwell Jr., the brigade’s operations officer. “We had 3 to 4 feet of water in some parts of Camp Buehring … flooded barracks and some tents were destroyed.”

It took some time for Camp Buehring to recover, officials said.

While there, the 30th ABCT served as the designated response force throughout the region to deter aggression and protect U.S. interests throughout parts of Bahrain, Egypt, Jordan, Saudi Arabia, Kuwait, Oman, Qatar, United Arab Emirates, and Uzbekistan, unit officials said. The brigade is comprised of forces from North Carolina, South Carolina, Ohio, and West Virginia.

The unit also came in during a period of heightened tension with Syria, officials added. At one point, the brigade deployed a reaction force to the country in response to a series of oil field attacks, making it the first U.S. unit to send Bradley Fighting Vehicles into Syria.

During the height of operations, the 30th ABCT shifted its mission to help sustain operations during the COVID-19 pandemic by setting up a quarantine area for incoming personnel in Camp Buehring, Bagwell said. The unit also provided quarantine area support at the division headquarters in nearby Camp Arifjan.

Moving forward, the brigade will take a short reset before ramping up for the next training and modernization cycles, Morrison said. The unit is set to field new platforms and several M1 Abrams and Bradley Fighting Vehicle upgrades by fiscal year 2024 and 2025.

One of the brigade’s newest capabilities will include a new M109A7 Self-Propelled Howitzer System. The 1st Battalion, 113th Field Artillery Regiment, 30th ABCT recently conducted an artillery live-fire exercise with the new system at Fort Bragg, North Carolina. The ABCT will be the first Guard brigade to receive the latest iteration of the Paladin system.

“Our citizen Soldiers add resiliency and their civilian skillsets to [the Army’s] capabilities to make us a unique fighting force in the world, capable of overcoming many challenges … to accomplish the mission,” Morrison said.