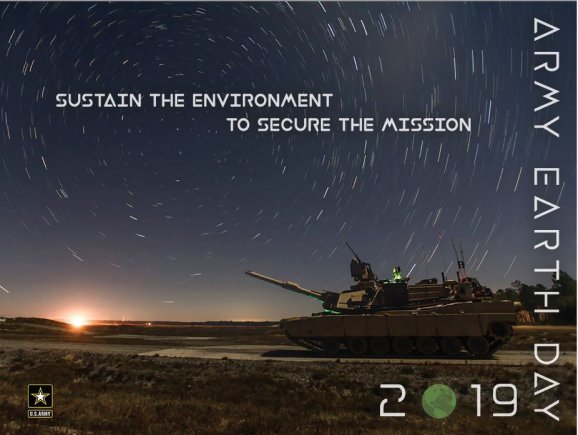 APRIL 22, 2019, Chievres, Belgium – April 22 is Earth Day in the U.S. First observed in 1970, the U.S. Army is highlighting its environmental stewardship achievements through its proactive measures to maintain, restore and enhance environmental resources year-round.

At U.S. Army Garrison Benelux, environmental stewardship is important since the garrison is uniquely situated with three main locations and Army Pre-positioned Stocks sites in Belgium, The Netherlands and Germany.

Directorate of Public Works’ Environmental Division conducts proactive measures for managing environmental resources. The team leads natural resources management, which aims to promote ecosystem sustainability on Army land so it can be capable of supporting mission functions and follow regulations and mission objectives.

The team is responsible, amongst other duties, for protecting wildlife and flora and avoiding pollution into the environment (air, water and soil) at all locations so garrison and mission partner personnel can perform their duties.

Mahieu further discussed the cultural resources at the garrison’s locations. Chièvres Air Base, for instance, dates back to World War I. Mahieu said wartime materials from both World War I and II were buried in the ground and are still being uncovered.

The team is, however, ensuring the past does not repeat itself by implementing programs to protect the environment.

“In order to keep the environment clean for our people and avoid this kind of issue in the future, we are implementing new programs such as the Environmental Officer program which helps ensure proper storage of hazardous material and waste for example,” she said.

READINESS AND MODERNIZATION
In addition to protecting the environment at our locations, proactive measures are happening inside our buildings and facilities. These measures, led by the USAG Benelux Energy and Water Conservation Program, support the Army’s readiness and modernization efforts.

According to Mélanie Chaballe, the energy manager at USAG Benelux, the U.S. Army is actively seeking and implementing technology to reduce its energy consumption so that installations are more sustainable and self-sufficient.

“In order to be resilient and ready, one major thing that we can do is reduce consumption,” she said.

At USAG Benelux, changes are occurring every day especially as the garrison is undergoing transformation at its three main locations in addition to renovations at the APS sites. This transformation is a part of the U.S. Army Installation Management Command’s European Infrastructure Consolidation, or EIC, which aims to reduce costs and increase efficiency and effectiveness.

In late 2018, the garrison began closing down buildings at Caserne Daumerie and moving offices to newly-renovated buildings on Chièvres Air Base. The buildings have more insulation and energy efficient features such as motion-sensing lights and water faucets as well as automatic thermostats.

The other garrison sites are also currently undergoing transformation. Schinnen’s Emma Mine site is scheduled to close in late 2019 as offices are being moved to the NATO Industrial Complex, or NIC, site in Brunssum, The Netherlands. According to Chaballe, buildings at the NIC site are renovated to include energy-efficient capabilities such as a building management system where heating, ventilation and cooling is controlled.

The Brussels site is also scheduled to consolidate buildings no later than 2024.

These buildings, according to Chaballe, will also have energy efficient features. Even though the garrison is using more automated systems for controlling energy consumption, Chaballe wanted to remind people to do their part in reducing their carbon footprint. She gave examples such as people being encouraged to bike to work and monitoring their energy consumption at the office and at home.

“You can reduce consumption by changing your habits,” she said. “We are transitioning from offices and buildings where everything is manual and moving to systems with automatic capabilities such as monitor sensors and automatic thermostats. However, if you have the control, please be responsible.”