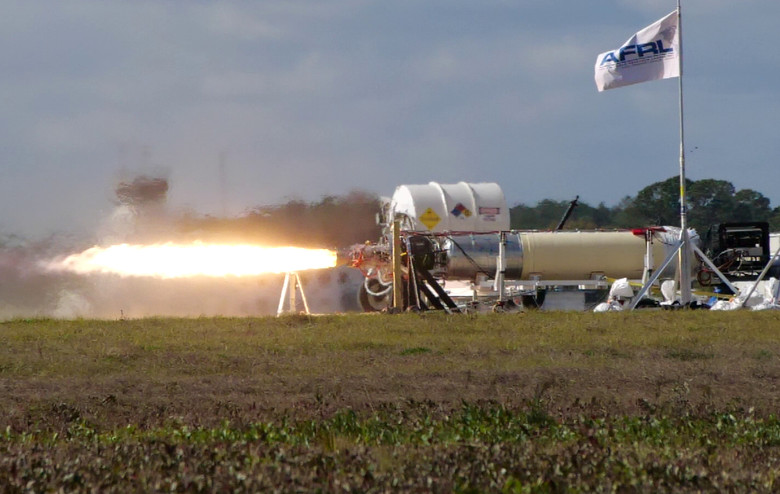 The X-60A is an air-launched rocket designed for hypersonic flight research. It is being developed by Generation Orbit Launch Services under an AFRL Small Business Innovation Research contract. The goal of the X-60A program is to provide affordable and routine access to relevant hypersonic flight conditions for technology maturation. This test included both cold-flow and hot-fire testing with the Hadley liquid rocket engine developed by Ursa Major Technologies. Flight-like hardware was tested using flight-like operational procedures. The test runs covered full-duration burns, engine gimbaling for thrust vector control, and system throttling.

“This test series was a critical step in reducing risk and gathering necessary system integration data in preparation for our upcoming flight tests,” said Barry Hellman, AFRL X-60A program manager. “When we go to flight later this year, we hope to demonstrate the capability of the X-60A to provide affordable access to hypersonic flight conditions, which will position AFRL to deliver an innovative test capability for the Air Force and other DoD organizations.”

X-60A is a single-stage liquid rocket primarily designed for hypersonic flight research and is launched from a modified business jet carrier aircraft. It is capable of testing a wide range of hypersonic technologies including airbreathing propulsion, advanced materials and hypersonic vehicle subsystems. The vehicle propulsion system utilizes liquid oxygen and kerosene propellants. The system is designed to provide affordable and regular access to high dynamic pressure flight conditions above Mach 5.

During the upcoming flight tests based out of Cecil Spaceport in Jacksonville, Florida, the X-60A will fly at relevant conditions necessary for technology maturation. Data will be collected to validate the overall vehicle design functionality as well as performance predictions.