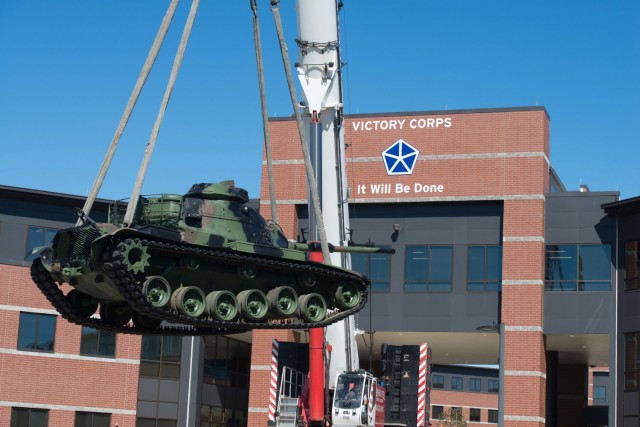 FEBRUARY 12, 2021 – After being reactivated in October following a seven-year pause, V Corps will be tested in several exercises as it seeks to be combat ready by this fall, its commander said Feb. 4.

V Corps, which was inactivated in 2013 as part of a drawdown in Europe, is currently split-based in the U.S. and Europe. While the corps is headquartered at Fort Knox, Kentucky, a forward headquarters was recently established in Poland as it prepares to help oversee assigned and rotational Army units in Europe.

“This year we’re focused on building the corps — manning, training and equipping it, and then starting to put it through a series of exercises to where we can get those reps and sets,” said Lt. Gen. John Kolasheski during a virtual event for the International Armored Vehicles Conference.

Training events
Next month, the corps is slated to participate in its first command post exercise, or CPX. U.S. European Command held a similar exercise in October in which more than 4,000 U.S. and NATO personnel virtually coordinated a response to a fictional crisis.

The corps will then join Defender-Europe 2021 in June, where it plans to play a role in another CPX.

“We are really fired up to participate in the CPX portion of Defender 21,” Kolasheski said.

Last year, the first Defender-Europe exercise had about 10,000 U.S. Soldiers and 13,000 pieces of equipment move into the region for training, despite being curtailed due to COVID-19, said Gen. Christopher Cavoli, head of the newly-consolidated U.S. Army in Europe and Africa Command.

This year’s Defender-Europe will have fewer maneuver forces and more high-end enablers train in southeast Europe, where Romania and Bulgaria have been modernizing their armies, Cavoli said last week.

Kolasheski likened the Defender-Europe 2021 exercise to Saber Junction 2019, when he led the 1st Infantry Division. As part of it, the division stood up both a main and support command post in Kansas and Germany that linked in other enablers to conduct the multinational exercise.

The division relied on virtual and live training to test its capabilities and also bring some “different perspectives and context” to the primary training audience, the 173rd Airborne Brigade in Italy, while it trained with a division headquarters, he said.

V Corps plans to replicate this construct by connecting its command posts between Kentucky and Germany during Defender-Europe 2021.

The corps is also scheduled to conduct other computer-simulated CPXs, which will specifically train the headquarters and its leaders. “It’s a great workout for the commander and staff,” Kolasheski said.

All of the training is slated to prepare the corps for a warfighter exercise in the fall.

“That warfighter exercise is kind of like our certification, our capstone event,” Kolasheski said. “Once fully certified, then we’re going to start picking up greater and greater responsibilities in Europe.”

Interoperability
As it nears full operational capability, V Corps will also strive to enhance its relationships with allies and partners.

The corps is looking to add a deputy commanding general from an allied nation to its chain of command, as well as allied officers at the lower levels of its main and forward headquarters, he said.

In Defender-Europe 2021, the corps also plans to have a multinational division fall under it, allowing U.S. and allied forces to closely share information and skills with each other.

“We don’t want to put our allies at a disadvantage,” Kolasheski said. “We want to give them the information, so that we are a cohesive team and we are responsive collectively.”

The Defender exercise series, he added, not only helps the Army test its strategic deployment capabilities, it also increases them when Army units work with allies and partners to leverage the theater.

“We’re really excited about that and look to expand off of it in the future,” he said.