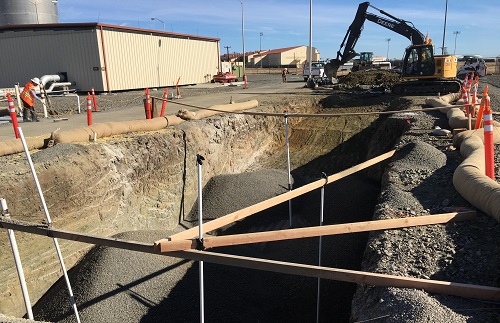 Additionally, the U.S. Environmental Protection Agency for Region IX is using the Travis AFB environmental restoration program’s (ERP) success to show other facilities how to use similar GSR approaches to effectively clean up contamination.

ASTM International is the largest organization in the world that develops and publishes voluntary technical standards for a wide range of materials, products, systems and services. Although the standards are voluntary, public law requires government agencies to use them whenever possible to save tax dollars and avoid duplicated efforts.

“This certification demonstrates that we were on the right track when we designed and tested innovative cleanup technologies that do not consume large amounts of energy or generate a lot of waste,” said Glenn Anderson, a geologist with the Air Force Civil Engineer Center Installation Support Team.

The ERP team is saving the Air Force about $37,000 in electricity costs annually while reducing greenhouse gas emissions by about 1.8 million pounds per year, said Lonnie Duke, the AFCEC restoration program manager.

By replacing some traditional and costly groundwater remediation technologies, such as pumping and treating billions of gallons of contaminated groundwater and returning it to the reservoir, the team also is saving the thousands of dollars it would have cost to construct, operate and maintain such systems in the future, Duke said.

Since 2008, the ERP team has worked with the environmental contractor, CH2M Hill and the U.S. Army Corp of Engineers not only to use green and sustainable cleanup technologies but also to test ways to improve their performance at several sites across the base.

“Every time we try something new and it works, we can apply it at the next site,” Duke said.

For example, the team installed a subgrade biogeochemical reactor, an underground biology-based groundwater treatment system, to treat a Stoddard solvent spill site near Hangar 811. Stoddard solvent is a colorless, flammable liquid used as a general cleaner and degreaser.

He said one of the first subgrade biogeochemical reactors was installed at Travis AFB in 2008 as part of an Air Force research project.

“Since then, SBGRs have been installed at multiple sites across the United States and Puerto Rico. However, no other installation contains as many SBGRs as Travis AFB, which currently has six,” Wray said.

The unit was constructed by excavating a series of trenches near the hangar and backfilling them with a mix of gravel, calcium peroxide and infiltration pipe. The difference between it and other bioreactors on base is its “washboard” effect, created by the way the extraction wells operate.

“Each well operates on a different schedule to allow the water table to tilt and fluctuate across the site, increasing the amount of oxygen in the groundwater. Naturally occurring bacteria in the groundwater uses the oxygen to break down the solvents into harmless compounds,” Wray said.

Phytoremediation was one of the first bioremediation technologies implemented at Travis AFB. In 1998, the ERP team and a team from Utah State University planted 100 red ironbark eucalyptus trees to treat an extremely large plume of contamination, mainly trichloroethylene or TCE, at the site of a former battery and electric shop. The team planted an additional 340 trees over the 2.24 acre plot in 2000.

The theory, which later became fact, was that the trees would draw the contaminated water through the roots system and treat the contamination through the trunk and leaves, without harming the trees. Tests later showed that phytoremediation removed about 50 percent of TCE in a 10-year period.

The ERP team later installed a bioreactor and an emulsified vegetable oil biobarrier near the same site, which further reduced contamination below cleanup standards, according to Wray.

The biobarrier consists of a row of 34 injection wells aligned perpendicular to groundwater flow. Water and the vegetable oil are injected under pressure through the wells into the groundwater. Microorganisms “eat” the oil as the water flows through the biobarrier, according to Doug Berwick, a CH2M Hill chemical engineer.

“We’re using the natural bacteria in the ground to do the work for us,” Berwick said. “Our job is to feed the bacteria so that they thrive, then collect measurements to check their progress. We want to ensure that we are cleaning up the site as efficiently as possible.”

The DOD established the environmental restoration program in 1975 to guide and fund the investigation and cleanup of hazardous soil and groundwater sites caused by past industrial waste disposal activities at military installations.

Travis AFB was added to the EPA’s National Priorities List, or Superfund, in 1989 because of contaminated landfills, disposal and spill sites, firefighting training and storage tank areas and 23 contaminated groundwater sites.

Since that time, the ERP staff has worked with the EPA, state regulatory agencies, the contractor, and an environmental restoration advisory board to cleanup or put in place remedies for all soil and groundwater sites.

“The fundamental goal of the Travis AFB restoration program is to protect human health and the environment by eliminating or reducing to prescribed, safe levels any potential risks caused by the Air Force’s past operations,” Anderson said. He added that the ERP team hopes to use more GSR cleanup technologies that save money, reduce life cycle costs and lower the base’s overall carbon footprint in the future.