DECEMBER 13, 2019 – The B-1 Lancer has been flown hard in the theater of war and terror for the past 15 years. In order to keep the fleet serving the Air Force for the next 20 years and beyond, it needs dedicated structural repair and maintenance, and that’s where Tinker Air Force Base comes in.

“It’s been flown past its certified service life and as such, it’s developed numerous structural issues and we’ve been working on repairs for over the last four or five years,” said Bill Barnes, B-1 Systems Program Office director. “We have those repairs developed, we know what aircraft tail numbers those repairs apply to. In our quest to get those repairs made to the fleet and to make the fleet healthy so it can continue to serve the Air Force until 2040, we’ve teamed up with AMXG (76th Aircraft Maintenance Group) to stand up a dedicated repair line just to repair B-1 structural issues.”

Barnes said they’ve worked closely with the 76th AMXG and other supply-mission partners over the last year to make these repairs supportable from a piece-part perspective, and now that they’re in Fiscal Year 2020, they have the funding to begin putting aircraft through the repair line. The first B-1 to go through this structure line arrived in October and, 23 days later, work is nearing completion.

“I think it’s pretty impressive that we’re not doing everything to the entire fleet, we know by tail number which parts of the aircraft have excess fatigue or corrosion that could cause mishaps later on,” said Col. Greg Lowe, 76th AMXG commander. “We want to apply the principles of the art of the possible just like we do for all of our other production lines not only in AMXG, but across the Air Force Sustainment Center. That is the guiding management principles for us and it’s the focus on identification of constraints and continual process improvement that will allow us to get on a timeline that will keep the number of aircraft captured here in the depot low to maximize aircraft availability out in the field for operational use.”

567th Aircraft Maintenance Squadron director, Rodney Shepard said they worked in coordination with SPO logistics professionals, equipment specialists and the enterprise team to come up with a plan to stand up phase one of the structures repair line. This phase will include the repair of seven urgent tasks on 10 aircraft with high flying-hour requirements compared to the rest of the fleet, as well as known structural issues. The repairs will be completed in a 30-day flow under a fly-in, fly-out program with 5,000 hours of repair invested into each plane.

“That’s where the artisans of the Oklahoma City Air Logistics Complex come in,” Lowe said. “To be able to take an aircraft that is beyond its designed service life, tear it down and make major repairs that we never thought we would do to the aircraft, we can do that and extend that life to continue operational impact in the future.”

Phase one of structure repairs will be split between two shifts and will utilize sheet metal and aircraft technicians for the workload. Phase two, which will involve a steady stream of B-1s coming through each year for repair with 14,000 hours of repair planned per airplane, will begin in April 2020 and will require a 50% increase in workforce numbers.

Shepard said an excess of 100 new employees have been hired in the past year in preparation for the workload. The workload is expected to be a Tinker AFB workload for the duration of the B-1’s life.

“The B-1’s been a great plane over in the desert. We’ve flown it hard, worked it hard and now it’s time for a little downtime to get some repairs made so we can have the aircraft ready to deploy when necessary to support the needs of the nation,” Barnes said. 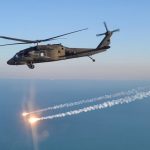