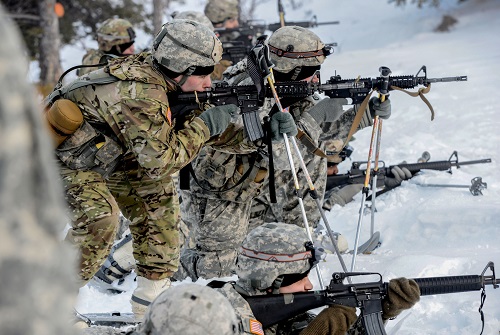 BLACK RAPIDS TRAINING SITE, Alaska (Army News Service) – During the winter of 1939 and 1940, winter-camouflaged Finnish ski troops for a time held off a much larger Soviet army that had neither skis nor winter camouflaging.

The effectiveness of the Finnish army in snow and freezing temperatures was a real eye-opener for the U.S. Army at the time, said Sgt. Sarah Valentine, an instructor at the Cold Weather Training Center here. “I think we as an Army have forgotten a lot of this stuff.”

With their 15-day Cold Weather Leaders Course, Valentine and other instructors here said they’re helping bring those kinds of skills to the U.S. Army, so U.S. Soldiers will be just as prepared to survive and win wars in an Arctic environment.

Before Soldiers can engage the enemy in such an environment, they must first learn how to move in Arctic conditions, Valentine said. That means learning to ski and snowshoe. Once Soldiers in the course master these skills, they are allowed to move out into the terrain and live-fire their weapons.

The culminating event of the course — attended by about 80 students from around Alaska — is the biathlon, a 10-kilometer ski course over hilly terrain followed by a live-fire using either an M-4 carbine or M16A4 rifle.

The biathlon adds realism to the training, Valentine said, because by the time the Soldiers live-fire their weapons, they will already be drained by the rapid pace of ski course, which they must undertake while also hauling their weapons and rucksacks.

After the ski course, Soldiers must concentrate hard on controlling their breathing while shooting, she said.

During most of the six days the Soldiers lived outdoors, temperatures hovered around minus-30 to minus-40 degrees. However, on the day of the biathlon, the temperature spiked to 39 degrees. That and a light rain turned the trails mushy, making them difficult to negotiate on skis. As a safety precaution, snowshoes were substituted.

Soldiers have to learn to deal with changes in the weather, Valentine said. “You have to adjust plans and be flexible.”

Prior to the biathlon, Soldiers cleaned their weapons with Arctic lubricating oil, explained Staff Sgt. Cody Fite, an instructor. The normal lubricant used by Soldiers would freeze in these temperatures.

In these conditions, Fite explained, a weapon can also jam when condensation that formed when a Soldier brought it inside freezes when the Soldier brings it outside. To prevent this, Soldiers keep their weapons outside of their heated tents on stands made of boughs.

Staff Sgt. Matthew Doane, an instructor, said that, in addition to applying special lubricants, Soldiers also employ a variety of shooting techniques unique to the environment such as using ski poles to create a stable bipod shooting position. According to Doane, the U.S. Army learned the technique from the Norwegian army.

Sgt. Jessica Bartolotta, a student, had never seen ski poles used for shooting and was impressed by how well the technique worked. She said the instructors teach shooting with ski poles in the standing, kneeling and prone positions.

During the biathlon, Soldiers are given a 30-round magazine and are allowed to select which position to shoot in. Bartolotta would have chosen the most challenging position, which is standing, but her ski poles were a bit too short to create the bipod. She shot in the kneeling position.

She suspected she performed well, but she wouldn’t know until later, once the instructors tallied the shots on the silhouette targets.

Staff Sgt. Jack Stacy, an instructor, said that once Soldiers learn that they can survive the cold, move over difficult terrain and engage targets, their confidence levels go way up. They realize they can not only survive but thrive in harsh Arctic conditions.