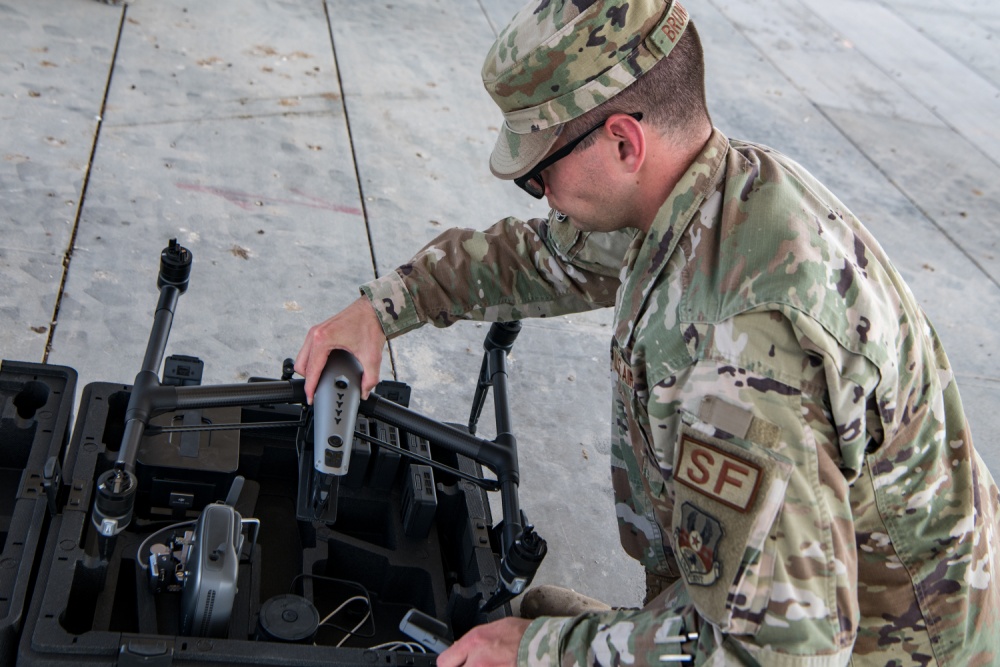 NOVEMBER 12, 2020 – The 379th Expeditionary Security Forces Squadron recently won squadron innovation funds for the purchase and use of small unmanned drones at Al Udeid Air Base, Qatar, to train Airmen to detect and defend against similar unmanned systems used by various adversaries.

The Army and Air Missile Defense Command approved these drones, which add an additional protective measure to the already multi-layered defensive capabilities in place at Al Udeid AB.

The drones that are part of the C-UAS program at Al Udeid AB range from smaller, low-cost drones to larger specialized UAS. All of these drones fall under group one of a classification system that divides UAS into five category groups. These groups are based on size, payload capability, operational frequency and availability.

Counter-drone technologies and capabilities are evolving within the U.S. Central Command area of responsibility. Category one through three drones employed by adversaries pose an evolving threat to operations.

“We are constantly refining our tactics, techniques and procedures,” said U.S. Air Force Lt. Col. Kevin Lombardo, commander of the 379th ESFS. “Adapting quickly and accurately to stay ahead of threats and a changing battlespace is key to maintaining readiness.”

It is easy for adversaries to acquire and use commercially available UAS, requiring service members on Al Udeid to be ready at any moment to recognize these potential threats.

“Availability and technology make it so these drones are easily weaponized,” said Tech. Sgt. Corin Dolson, 379th ESFS. “Specific types of drones are used by the enemy. And to know how to defeat these systems, we have to use these systems. These drones are critical to testing our systems and ensuring our personnel are familiar with what they’re fighting.”

While drones pose a direct threat to bases throughout the USCENTCOM AOR, there are also concerns these devices can be used for intelligence gathering or to strike an aircraft. Ensuring Air Force security entities are able to successfully disrupt the link between the device and its user before it can access the base is critical. Once the drone is no longer controlled by an off-base threat, security forces Airmen are able to notify relevant base agencies to neutralize the drone and begin investigating its origins.

“With the drones that are now part of our C-UAS program, we are able to more effectively sight and track the units,” said Dolson. “Our Defenders in the base defense operations center determine the threat level and decide on a course of action according to our military’s rules of engagement.”

Working with Air Force Special Operations Command, the lead Air Force command for small unmanned aircraft systems, the 379th ESFS has established a highly capable program to detect and defend against UAS threats in the AOR.

“This process is becoming a better-oiled machine as we practice with these real-world training aids for our Defenders in the field,” said Dolson. “They see firsthand what they look like at a distance. We also mimic current enemy tactics, techniques and procedures to test current C-UAS capabilities and systems functionality.”