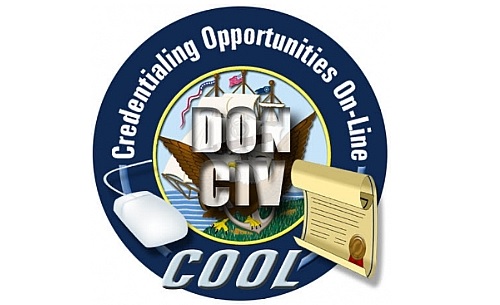 Navy COOL provides active-duty and Reserve Sailors, whether forward deployed, underway, or ashore, a way to map their Navy education, training, experience, and competencies to civilian credentials and occupations.

Alberque and Adkins hosted one-hour briefs during normal working hours at each location. Each brief included a tour of the Navy COOL website and explained the voucher submission process and credentialing eligibility requirements. They also held evening briefs for Sailors working night shift.

“Our goal was to travel to as many bases as possible and tell as many Sailors as possible about the opportunities they have to enhance their military careers, and set themselves up for success in the civilian sector,” said Alberque. “Many Sailors were extremely welcoming and appreciative that the Navy COOL team traveled halfway around the world to speak to them, and our office received a significant increase in the number of voucher requests and phone calls from the areas we visited.”

The schedule for upcoming COOL brief opportunities is available at http://www.cool.navy.mil/usn/news/briefs.htm.