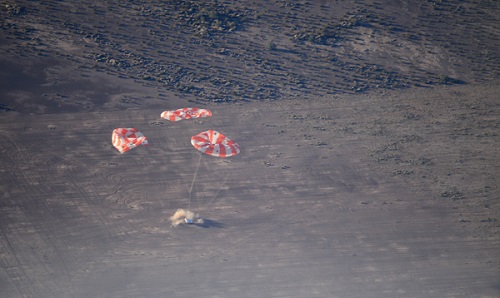 JULY 8, 2016, YUMA PROVING GROUND, Ariz. – Conducting an individual test can be an unbelievably complicated undertaking, particularly when dealing with an expensive one-of-a-kind system. Late June’s test of the parachutes destined for use aboard NASA’s Orion spacecraft is a case in point, for it involved a vast number of complex moving parts that had to mesh together in a precise, carefully planned and thought-out manner.

The parachute system for Orion is a complex system of its own, composed of 11 different parachutes which operate to slow down the spacecraft and bring it to a safe earth landing. The system’s three primary parachutes are made of tough nylon and are the size of football fields.

Though NASA has conducted 17 previous parachute drops at the proving ground, planners say each deployment is slightly different.

“The parachutes are packed under thousands of pounds of pressure. It takes over a week to pack a main parachute,” said Koki Nachin, NASA chief engineer for the capsule parachute assembly system. “In the final qualification phase, which we are in now, we will demonstrate that the parachute system works as expected within the predicted range of performance.”

According to Nachin, NASA plans for an unmanned Orion mission to go into lunar orbit in 2018, with the first astronaut flight occurring in 2022.

Ellen Ochoa, former astronaut and current director of NASA’s Johnson Space Center, was on hand to witness what was to be the eighteenth drop at Yuma Proving Ground, but it was ultimately aborted due to an oxygen system problem aboard the C-17 aircraft carrying the parachutes and payload. Ochoa is a strong believer in the overall value of the testing.

“It doesn’t matter how well the rest of a space mission goes, for if the parachutes don’t work properly at the end, you don’t have a successful mission,” she said. “I’m responsible for the safety of our astronauts and for the success of the Orion program, and what goes on here is a key component of that success.”

Ochoa has an interesting background. An astronaut for 12 years, she was the first female Hispanic astronaut in world history. Her first flight occurred in 1993, with her last of four in 2002.

This test marked her second visit to Yuma Proving Ground. She first visited many years ago when NASA conducted a test of parachutes designed for the X-38 vehicle, which was proposed as an emergency escape vehicle for the international space station. That project was later cancelled.

American astronauts have traveled in space each day for the past 15 years as members of the crew aboard the international space station, Ochoa says. All crews are transported to and from the station, which flies between 230 and 250 miles above the earth, by Soyuz spacecraft launched in Russia through a partnership between NASA and the Russian Space Agency.

“Several hundred scientific experiments are ongoing aboard the international space station at any one time,” she says, “plus we use the station as a test bed for further space exploration.”

Ochoa says NASA tests components and systems aboard the station that will help the agency conduct deep space missions. The Orion spacecraft, the largest spacecraft ever built, will be capable of visiting the moon, an asteroid and even the planet Mars.