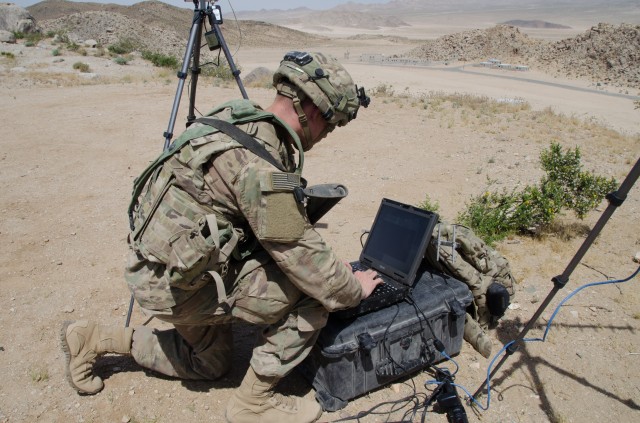 MARCH 18, 2020 – The Army’s senior intelligence officer likened intelligence and cyber Soldiers to those in the combat arms since they fight on networks everyday with adversaries.

“Our intelligence professionals and our cyber operators are duking it out,” Lt. Gen. Scott Berrier said. “I kind of think of ourselves, cyber and military intelligence, as sort of combat arms. I know it’s hard to get your head around that, but we’re the ones who are kind of doing that right now.”

Berrier spoke Wednesday as part of the Association of the U.S. Army’s breakfast series on threats the Army is facing in today’s era of great power competition.

RUSSIA
Since the end of the Cold War, the general said Russia has transformed its army to be smaller with new capabilities that it has been able to test in operations in nearby countries.

Using those lessons, he said Russia now uses those capabilities in Syria, which include air and air defense, precision targeting, special operations and contract forces, and intelligence, surveillance and reconnaissance, or ISR.

The capabilities have also created standoff for Russia as it presses back against NATO presence in Europe, he said.

“We’re watching that very, very closely,” Berrier said. “[We] don’t think [Russia] wants to get in a toe-to-toe fight with the U.S. [It] wants to be regionally dominant and to be a global player.”

CHINA
In the Pacific, he said China aims to be a global economic hegemony by 2049, and at same time gain military parity with the U.S. to push American forces out of the region.

“It really [wants] to establish a new world order,” Berrier said. “They are jealous of the economic system that we have.”

The general added that China would one day like to see its currency, the yuan, replace the U.S. dollar as the global currency.

To achieve its ends, China has started to militarize islands in the South China Sea, creating an effective defensive line.

China “would like to control everything out to the first and second island chain and just keep us out,” Berrier said.

Similar to Russia, China has reorganized its army to be smaller with new capabilities in air and air defense, space and ISR using intellectual property it illegally obtained.

“Much of the modernization that [its] been able to accomplish is with technology that [was] stolen from us and our partners,” Berrier said.

China has also carried out a reversal of the Marshall Plan, he said, by going into countries struggling financially and paying off their debt and building infrastructure. As a result, China then sort of owns that country and can place forces and capability inside of it, he said.

The general noted that by doing this China is also trying to connect markets to its own.

The Army is putting together multi-domain task forces that have I2CEWS — intelligence, information, cyber, electronic warfare and space capabilities — that will allow Soldiers to punch through enemy frontlines.

They “will help us in that boxer stance and be able to get inside, penetrate the ability that they have to keep us out,” he said.

“So if you want to do MDO, you have to do MDI,” he said. “And in MDI in the future it’s all about the data and how we process and how we pull [artificial intelligence] into that.”

Army intelligence plans to have three layers of upgraded capabilities at the terrestrial, aerial and space levels.

In the air, he noted, the Army will need a new platform that goes higher and can sense deeper.

And for space, the Army looks to work with its partners to take advantage of assets, whether they’re owned by the government or commercial satellites, to carry out long-range precision fires in coordination with aerial and terrestrial systems.

“Think of this sensor grid, from space to mud, that is connected through multi-domain intelligence using and fusing data at the speed of combat operations,” he said.

A TITAN space prototype, which is expected to be delivered by fiscal year 2022, is being developed to provide targetable data from these sensors to fire networks.

“TITAN is going to be the ground station that replaces a number of these systems that we have today [and] is central to all of it,” he said.