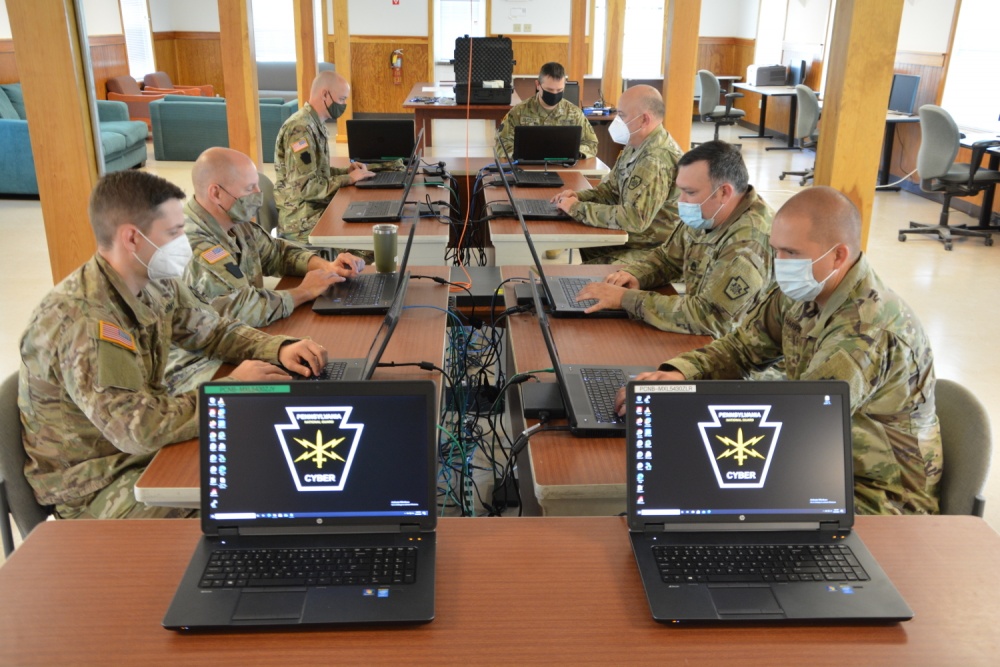 On Nov. 3, 2020, West Virginians across the Mountain State will be going to the polls to elect a full slate of officials from President of the United States, to Governor, to candidates in local races at the county and city level. Making sure that the voting process is protected from potential attacks so that citizens and officials can be confident in the election process and results is a primary focus of the West Virginia Secretary of State’s office, the West Virginia Office of Technology, the West Virginia Division of Emergency Management, and the WVNG.

“Our mission is to help state officials ensure a safe and secure voting process,” said West Virginia Army National Guard 2nd Lt. David Parsons, WVNG cybersecurity manager. “Cyber-attacks are unfortunately becoming more and more prevalent and can be executed by hostile government or non-governmental players from anywhere in the world. Our job is to counter potential intrusions into our voting systems to make sure every citizen gets to vote and their vote counts and counts as it was cast.”

The U.S. Department of Homeland Security Cybersecurity and Infrastructure Security Agency has deemed cyber threats to elections as “high risk,” from poll booths to public facing voter registration systems. State and local voting databases could be locked by hackers demanding ransomware or manipulated by outside actors, including changing voter databases with incorrect party affiliations, addresses, etc.

With such high priority need given to cybersecurity for elections, the WVNG was called into action by authorities to help the state strengthen its defenses.

Beginning in 2016 when assistance with elections security was first requested by the West Virginia Secretary of State’s Office to conduct an initial assessment of West Virginia voting systems and provide recommendations to shore up existing and potential vulnerabilities, the WVNG has played an active role in cyber security. This has been accomplished both statewide and nationally, which has included assisting with primary authorship of a United States Cyber Command concept of operations for threat intelligence sharing between the federal and state level that has been adopted nationally.

To date, more than 100 Guard members assigned to the WVNG’s Army Integrated Training and Education Center and the DCEO have been trained in and have achieved cybersecurity certifications including Certified Ethical Hacking – also referred to as white-hat hacking- working with agencies to inspect network infrastructure in order to find security vulnerabilities, which a malicious hacker could potentially exploit.

Leading up to the 2020 election cycle, the WVNG has placed members of the DCEO at the West Virginia Cybersecurity Office located in the state Capitol, as well as at remote locations around the state, to monitor potential cyber threats. Three Army National Guard Soldiers and three Air National Guard Airmen are assigned to the task, providing around-the-clock monitoring of election network systems as well as supplemental manpower and technical expertise. Additional troops will be deployed around the state closer to and throughout the general election.

“The WVNG brings a lot of experience and significant amounts of high-tech training to serve as force multipliers to the State’s cyber security professionals,” said U.S. Air Force Lt. Col. Jody Ogle, a Cyber Space Operations Officer and WVNG’s director of communications and cyber programs. “Cybersecurity is a function that we take incredibly seriously in the Guard, both on the preventative and response sides, and we couldn’t be prouder of our role in helping our state partners protect and defend our elections here at home.”

“The Citizens of West Virginia should be confident that, with our federal, state, and local partners, we are doing everything we can to make sure that voting in our state, a right and responsibility enshrined in our Constitution, is safe from threats and cyber-attacks and that accurate results will be protected so that the voice of each and every West Virginian who votes will be heard,” he added.