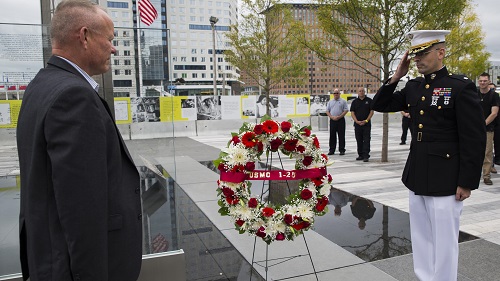 OCTOBER 14, 2016, BOSTON, Mass. – Fallujah Marines and Sailors from 1st Battalion, 25th Marine Regiment, 4th Marine Division, joined each other in Boston, Oct. 8, 2016, to commemorate the 10th anniversary of their deployment to Fallujah, Iraq.

The service members gathered to recognize and reflect on their accomplishments during their seven-month mobilization in 2006.

From March through October 2006, 1/25 Marines and Sailors conducted thousands of patrols and participated in several regimental-size operations such as searching stores, clearing suicide bombs, controlling entry points into and out of the city, and networking with local youth. Additionally, they played a significant role in eliminating and capturing some of al-Qaeda’s top leadership officials.

“Far too often your time in the Marine Corps is just a chapter in a book and once that chapter closes, you lose that bond with some of the guys you served with,” said Sgt. Maj. Matthew Fortune, Inspector-Instructor Sergeant Major of 1/25. “This is a time for them to get together, break bread, talk about the things they went through and bring that brotherhood back together.”

Gold Star families from 25th Marine Regiment were present and honored at the reunion. During the unit’s deployment, 10 Marines and one Sailor were killed in action. An emotional wreath laying ceremony for those who lost their lives was held at the Massachusetts Fallen Heroes Memorial as part of the reunion’s scheduled events.

“The family members of the fallen are so strong and this is a great way for us to get together, show them our support and never forget that their loved ones laid down their lives for us,” said Benjamin Fortier, former lance corporal who served with 1/25. “When you go to a ceremony for a fallen service member it is always humbling and you realize that when you sign that contract, you are taking an oath and putting yourself on the line.”

The Marines and Sailors from 25th Marine Regiment viewed this reunion not only as a chance to catch up with each other, but as a way to make sure their brothers were taking care of themselves.

“A reunion like this is what we would call a health and wellness check,” said Fortier. “To get that face-to-face connection and to catch up with people is great. We’re all coming together and checking up on each other to make sure that 10 years later everyone is doing better than they did when we came home.”

The Commandant of the Marine Corps, Gen. Robert B. Neller, is calling 2016 “the year of reunions.” A video message for 25th Marine Regiment from Neller was played during the event. He thanked the service members for all they did in Fallujah and reminded them to continue to look out for one another.

“I am proud to say that I saw what you did out there, saw the sacrifices you made and I know how well you served, so thank you for that,” said Neller. “I know you are taking care of each other, staying in contact and helping each other get on with their lives.”

The guest of honor at the reunion was Lt. Gen. Lawrence D. Nicholson, commanding general of III Marine Expeditionary Force. Nicholson was the commander of 5th Marine Regiment, 1st Marine Division, in 2006, and deployed with 25th Marine Regiment to Fallujah. He spoke to the service members about how proud he was of their actions and how the difference they made will never be forgotten.

As the service members raised their glasses in a toast to one another, they agreed that 10 years is far too long to wait for another reunion. They hope to continue to stay in touch, check in on one another and reunite in the near future.