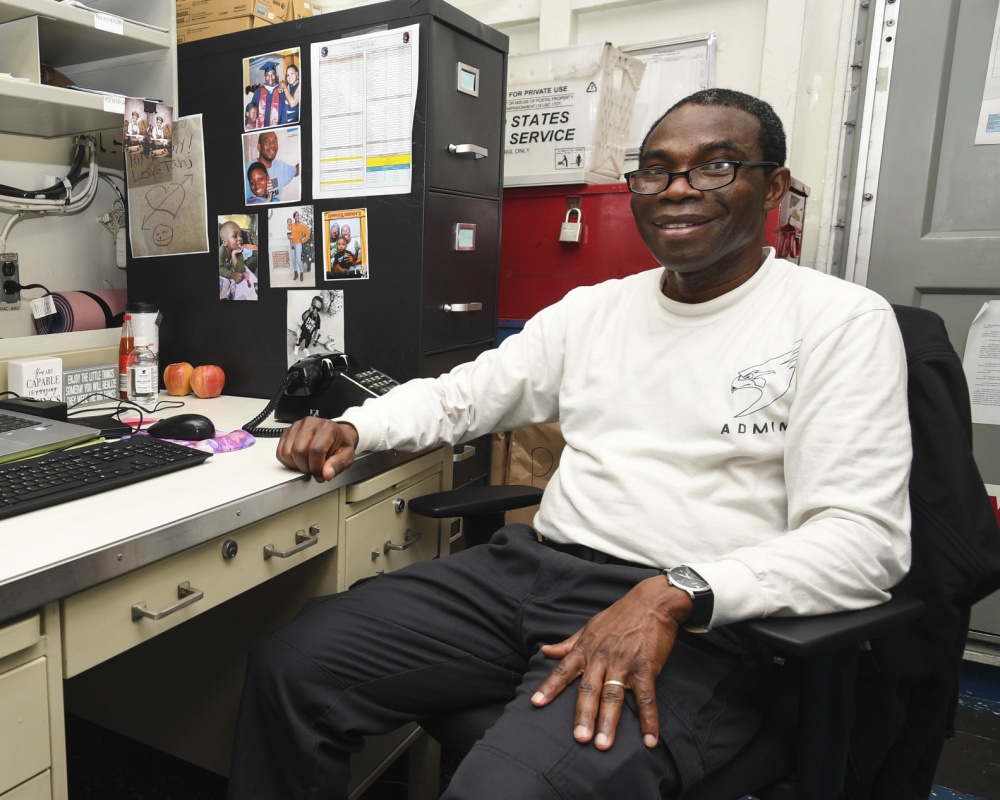 JULY 6, 2020 – The Sierra Leone Civil War was a conflict between the rebels of the Revolutionary United Front and the Sierra Leone Government that lasted over ten years. This conflict would prove to be one of the most tragic events in history, resulting in the deaths of between 50 and 300 thousand and the displacement of over 2.5 million.

It was a desperate time for millions of people. Life-altering decisions had to be made by those fleeing the violence; decisions that could put the safety of their families and themselves in jeopardy.

“The rebels from Liberia spread to Sierra Leone,” said Personnel Specialist 1st Class Patrick Mbayoh, a first generation Sierra Leone immigrant. “It started in the remote parts of the country, but the war eventually spread to Freetown, the capital city, where I lived in 1996. I was biding my time, hoping that the war would not come to Freetown. When the war finally came I knew it was time to get out.”

Mbayoh spent every day, in Sierra Leone, living in fear of the next shooting or the next attack. Attacks that could happen at any place at any time.

“It was guerrilla warfare,” said Mbayoh. “We called them rebels, but now, I think we would call them terrorists. Sometimes they would have military type clothing. Sometimes they would be in civilian clothing, but they lived in town among the civilian populations. It was difficult to tell if they were rebels, and we wouldn’t know until they were given the order to shoot. It was dangerous.”

Many refugees fled across the border of Sierra Leone to settle in Guinea. Mbayoh said he and his wife worked together with a group of families to make the journey to Guinea where they hoped to escape from the war.

The displacement of refugees left them exposed to horrible living conditions where many were lost or killed.

“I was greatly affected by the war. I lost my mom and three sisters,” said Mbayoh. “My sisters died from various ailments from living in the bush and my mom was shot. I have a brother that is still missing to this day. We believe that he is probably dead, but we never found a body. All of this happened during the war.”

Mbayoh explained that his mother was killed even after fleeing Sierra Leone to Guinea. Many refugees were targeted by rebels and were killed in settlements in Guinea.

Refugees from countries affected by wars and other disasters work with the United Nations and other host countries to find a safe place to resettle them.

Mbayoh said he worked with an ambassador in Guinea to find a country where he could resettle with his wife.

“Everyone wants to come to America,” said Mbayoh. “Another country isn’t even a choice. If someone said, ‘You can go to America,’ then you would go to America. It was exciting to find out that I was going to America, but I also had some anxiety. I didn’t believe it was actually going to happen until I got off the plane in America.”

Mbayoh said there were some initial challenges after arriving in the U.S. Before they left Guinea, he and his wife were given an orientation and materials to help them prepare for the move.

After arriving in Brooklyn, New York in 1998, Mbayoh was sponsored for one month. He said housing and food were provided with the expectation that he would find employment and eventually be able to support himself.

“The first place I worked was McDonald’s. Growing up in Sierra Leone I was used to eating rice. If I got three meals in a day, then rice was every meal. It was different from what I was used to. It was interesting getting used to that.”

Moving to the U.S. gave Mbayoh the opportunity to pursue a life-long dream.

“Finishing grade school was a huge accomplishment but it was difficult to see how to proceed after that and obtain a higher education and it seemed impossible”, added Mbayoh. “When I moved to America it seemed like my dream might be possible.”

Mbayoh attended college for one semester while he worked at McDonald’s. He said he did not understand the financial aid system clearly when he signed up for classes and was not aware that he would have to pay the loan back.

“The counselors tried to explain that I did not have to pay it back until after I finished school,” said Mbayoh. “I did the math and figured out that I would owe a lot of money by the time I finished the degree and that discouraged me.”

Mbayoh said there wasn’t a way to support his family comfortably and attend school. He spent a lot of time walking around thinking about how he could accomplish his goal of earning a college education.

“It was when I was walking around that I walked into a Navy recruiter’s office,” said Mbayoh. “When I went to the recruiter he told me I could go to college wherever I was stationed. He said that even on a ship they would have college courses available to me. I joined the Navy in September of 2000.”

Mbayoh said his focus throughout his 19-year career has been to attend college. He said he has been able to earn a bachelor’s and a master’s degree while he served as an active-duty Sailor.

His focus and commitment to his goals have allowed him to achieve goals he never thought were possible.

“When I was in Africa, I never thought that I would end up in the greatest Navy in the world. When I walk around the ship, I walk around with a heart full of appreciation for what I have been given.”

Mbayoh gained his American citizenship in 2003. He and his wife have a child and live in Lemoore, California. Mbayoh hopes to one day retire from the Navy and go back to school to gain his PhD.

“America is a place that is full of possibilities. You have to focus on what you want to accomplish and it will be possible. There is help to be found for whatever you want to do. In America, you can accomplish anything you want as long as you don’t give up.”