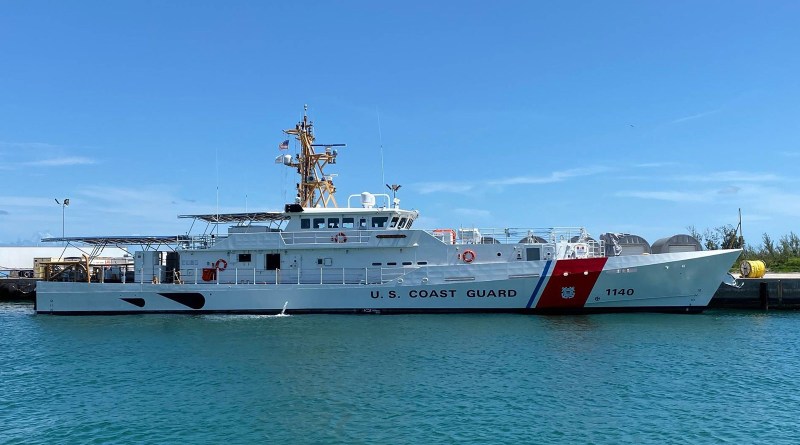 The Oliver Henry was placed in commission, special status, and will remain in Florida while the crew completes pre-commissioning trials and maintenance. The cutter is scheduled to arrive in Santa Rita, Guam, later in 2020.

“The fast response cutters are a real game changer here in the Pacific for the Coast Guard,” said Lt. Cmdr. Jessica Conway, the Coast Guard 14th District’s patrol boat manager. “Already the FRCs stationed here in Hawaii are conducting longer missions over greater distances than the older patrol boats they are replacing.”

The Oliver Henry will be the second of three planned FRCs stationed in Guam. The new cutters are capable of conducting a variety of missions including search and rescue, protection of living marine resources, and international partner engagements throughout Oceania.

“Here in the Pacific one of our greatest challenges is distance,” said Conway. “With the FRCs boasting a larger crew size and greater endurance, they are able to complete missions both close to shore and over the horizon, aiding both the people of Guam and our partners in the region.”

The 154-foot cutter is named after Oliver T. Henry, Jr., an African American enlisted Coast Guardsman who served from 1940-1966 and was the first to break the color barrier of a then segregated service.

Henry became the first recognized African American Coast Guardsman to transition from mess attendant to Motor Machinist’s Mate. From then on, Henry blazed a trail for minorities in the US military as he climbed the ranks and served on 10 different Coast Guard Cutters. He retired as a Chief Warrant Officer in 1966.

Oliver Henry’s descendants attended the acceptance ceremony virtually and in person at CG Sector Key West. “He not only served with distinction, but he mentored and inspired so many people,” Coast Guard veteran Justin Cardoza said of his grandfather.

“We are humbled to serve onboard the cutter bearing Oliver Henry’s name,” stated LT John M. Hamel, Commanding Officer. “I am extremely proud of the crew for their hard work preparing for acceptance and their unwavering drive to honor Oliver Henry’s impressive legacy.”

Each FRC has a standard 24-person crew. This will bring more than 70 new Coast Guard members to the island, along with a projected 100 dependents and family members. Early last year, the Coast Guard presence on Guam was comprised of about 250 active duty personnel and about 40 reservists.