“The Army continues to focus on building IT capacity and increasing bandwidth speed by a thousand times,” said Lt. Gen. Robert Ferrell, who became the CIO/G-6 in December 2013.

“We are greatly improving operations and training at posts, camps, and stations and for deployed organizations,” Ferrell said. “More IT capacity and speed enables home-station mission command; split-based operations; and live, virtual and constructive training.”

“We will also ensure that our tactical networks remain on pace with the strategic network efforts and the vision for the end-to-end Network of 2025. As the Army builds a synchronized end-to-end network, they are also re-focusing on reducing the complexity of tactical/deployable networks for the Soldier on the ground,” Ferrell said.

Ferrell spoke at the Army IT Day hosted by the Armed Forces Communications and Electronics Association in Vienna, Va.

The Army also continues to partner with the Department of Defense to expand enterprise services, move to a software cloud solution, and consolidate and close data centers. Increased network security is still a priority as the Army moves to a more defendable perimeter, continuous network monitoring, and identity and access management across the network.

“We’re doing all this while reducing costs — key during this time of budget constraint,” Ferrell said.

“The signal, intelligence, and electronic warfare communities are inextricably linked, and we’re expanding mission integration,” said Ferrell. “We’re also supporting the Army’s new signal and cyber school at Fort Gordon, Ga.” The location was announced by the Secretary of the Army in Dec. 2013. 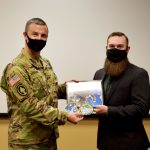