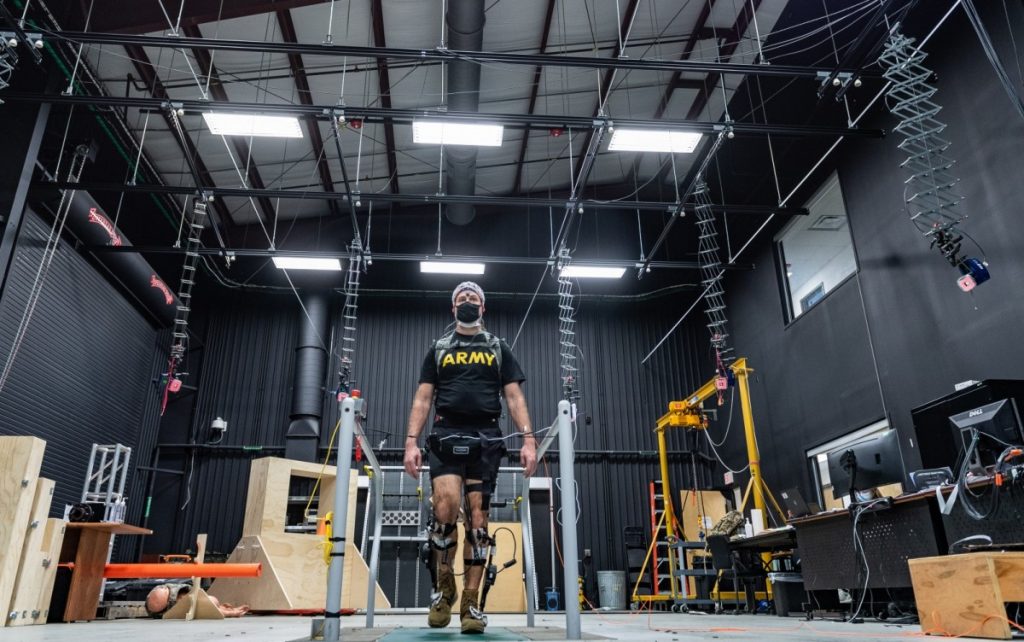 APRIL 23, 2021 – Army researchers are answering tough questions as part of a new study that focuses on how technology adapts to human behavior. In the past, Soldiers faced challenges adapting to novel technologies intended to optimize performance.

This study used an adaptive exoskeleton boot that operates in synchrony with the Soldier for optimal performance. Army technology concept developers explored this as an example of an intelligent agent with potential value to Army operations.

Researchers assess a spectrum of perceptions that characterize the boot as working naturally or with difficulty.

“Intelligent agents are rapidly becoming more prevalent for many applications and are expected to work in conjunction with humans to extend the team capability,” said Dr. J. Cortney Bradford, research scientist, U.S. Army Combat Capabilities Development Command, known as DEVCOM, Army Research Laboratory. “For optimal performance of the team, the human and agent must rapidly adapt to each other as well as the changing operational dynamics and objectives.”

Understanding the mechanisms and factors that predict and shape mutual and stable adaptation between humans and adaptive agents across time is critical, she said.

The study’s goal is to uncover brain signals, muscle signals, movement profiles and walking performance metrics that can track the state of humans as they interact with the exoskeleton.

“This will both improve our understanding of how humans adapt to intelligent systems, but also these signals carry information that could be used to help train the agent,” Bradford said. “These signals could give the exoskeleton a better understanding of the human at any moment so that it can make better decisions on how to assist the human.”

The device, known as the Dephy ExoBoot, gives the user assistance at the ankle joint while performing challenging physical tasks, such as walking with a heavily loaded rucksack. For healthy adults, walking is a relatively easy task, but for a Soldier carrying a heavy load, the benefit comes from help in conserving energy, Bradford said.

The ExoBoot is not directly controlled by the user or any other human operator. It has an internal computer that serves as a controller that must figure out on its own how and when to assist the person wearing the ExoBoot.

The device uses a combination of mechanical sensors, models of human behavior and machine learning to determine things like how and when to provide assistance to the user.

For example, the current version only provides assistance during walking, so it must determine whether or not the user is walking as opposed to running, skipping or dancing, then determine where the user is in their walking pattern to appropriately time assistance. Timed assistance is based on gait changes brought on by user fatigue, walking speed, load carriage or even terrain change, Bradford said.

Researchers recruited 20 test subjects for this study, including a handful of Soldiers.

“Aside from sometimes needing their special skill sets, it is a great opportunity for information exchange between the bench scientists and Soldiers,” Bradford said. “We don’t get to interface with Soldiers often and appreciate any insight they can provide. It is a great way to come learn about the science as well.”

“It’s the real-world experience that Soldier’s bring to bear,” said Sgt. Maj. Luke Blum, who is also DEVCOM ARL’s senior enlisted leader. “While ARL researchers try to anticipate the requirements that a Soldier may have, without field experience, we may fall short in that arena. This could be anything to the practical use of equipment, the employment of field tactics to considerations that go into planning an operational engagement.”

Study participants visited the laboratory for several hours. It took researchers two hours to place sensors from head-to-toe concentrating on over five muscles of each leg to record muscle signals.

They placed more than 40 reflective dots on various parts of participants’ bodies to measure–with the lab’s optical motion tracking system–how participants move. Researchers also attached 128 dual-layer electroencephalography electrodes developed within the Cognition and Neuroergonomics Collaborative Technology Alliance on participants’ scalps using a cap that looks like a swim cap to measure brain signals. These EEG sensors have enabled high-fidelity neuroimaging during locomotion in complex scenarios such as walking while learning to use an adaptive exoskeleton.

After a few quality checks to ensure the sensors worked, researchers invited participants to walk on the instrumented treadmill located in the Soldier Performance and Equipment Advanced Research Facility. Participants walked for about an hour both with and without assistance from the ExoBoot for comparison.

This work is part of a larger ARL research focus area to integrate humans and artificial intelligence to enable teams that can survive and function in complex environments.

Bradford said the team will analyze the data for the next several months and present this data at national conferences over the summer to get critical feedback on research pathways. It will take the research team some time to understand the neural signals recorded in this study particularly because the ability to record brain activity in scenarios studied with the ExoBoot is still relatively novel, she said.

“We don’t have much data to compare to it,” Bradford said. “Our longer-term objective is to identify the critical biometrics and integrate them into the exoskeleton controls.”