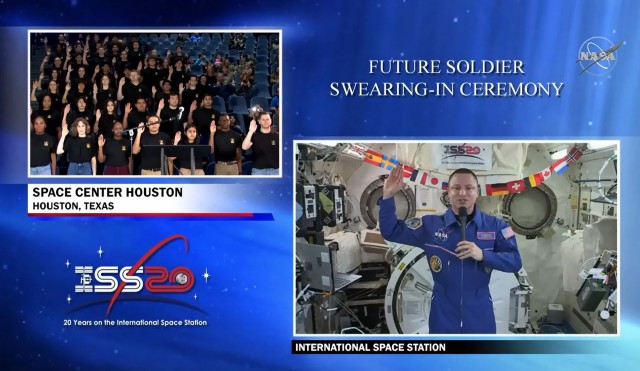 FEBRUARY 27, 2020 – An Army astronaut swore in nearly 1,000 recruits from space Wednesday as part of the first nationwide Oath of Enlistment ceremony from the International Space Station.

Col. Andrew Morgan, who has been at the station since July, administered the oath to future Soldiers located in over 150 locations across the country.

Morgan arrived at the space station on July 20 — the 50th anniversary of the moon landing. So far in his nine-month mission, he has conducted seven spacewalks, the first of which in August lasted over six and a half hours.

The Ranger-tabbed doctor with several years of experience in the Special Forces also said he expects to conduct nearly 300 different science experiments while on board with his crew.

Before the oath, Morgan told the recruits that although he now serves as an astronaut 250 miles above Earth, he once recited the same oath to become a Soldier.

“I made the decision when I was 18 years old to raise my right hand just like you’re about to,” he said. “I am still a Soldier. I’m just serving in space on the ultimate high ground.

“I’m here as the direct result of the incredible opportunities I had in the Army and I’m a Soldier through and through.”

Morgan then unzipped his blue NASA uniform to reveal a black t-shirt with “Army” in white and gold lettering.

Following the oath, Morgan answered questions from the recruits during the 20-minute live broadcast event.

When asked about how he handled obstacles throughout his career, Morgan said to ignore the voice in your head that wants you to quit when facing a challenge.

“That is your signal that what you’re doing is worth doing,” he said. “You need to suppress that and drive on. I can’t stress that enough. Things that are worth doing are difficult.”

Before being selected to the astronaut program in 2013, Morgan graduated from the U.S. Military Academy where he was a member of its parachute team. He attended medical school and then served in the Special Forces, where he deployed in support of combat operations in Iraq, Afghanistan and Africa.

Morgan credited the Army for offering him those variety of challenges to prove himself.

“If you ever find yourself bored or not finding what you’re interested in … you’re not looking hard enough,” he said. “Keep looking because it’s out there. There are so many opportunities.”

The demanding, realistic training he encountered as a Soldier also helped ready him for the rigors of being in space.

“Those experiences hardened me,” he said. “They gave me the grit I needed when I experienced tough training as an astronaut. We’ve had tough training as part of our training to be up here on the space station, but everything that I did in the military prepared me for this moment.”

Another recruit asked how he has dealt with weightlessness in space, which, at first, Morgan said it felt like he was hanging upside down all the time.

At the end of the event, Morgan said it he was humbled to share this unique experience with the Army’s newest Soldiers.

“All of you have started an exciting journey that begins today and I am so proud of you and your decision to serve,” he said. “This will certainly be one of the greatest memories of my time here … on the space station.”

Morgan then tossed small flags of each of the services that floated in the air and performed a backflip to show his microgravity environment.