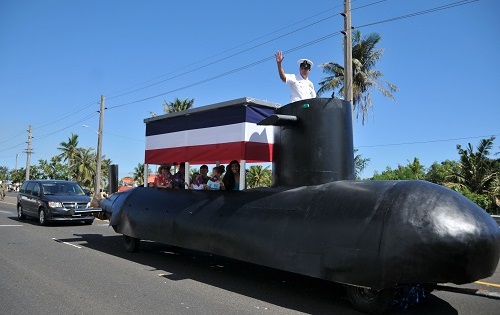 The parade commemorated 72 years since U.S. armed forces liberated the island from Japanese occupation during World War II, and kicked off with a B-52 flyover from Andersen Air Force Base as well as the presentation of colors by a joint color guard — musically accompanied by the III Marine Expeditionary Force Band from Okinawa.

Joint Region Marianas Ombudsman and Assembly Chair Trisha Pair had a front row seat at the parade as she served as a judge for the float entries. Pair, whose husband serves aboard Los Angeles-class attack submarine USS Chicago (SSN 721), said it was her second year at the parade and was excited to see all the entries.

“I think it’s just fantastic; just the spirit of it is quite wonderful,” she said. “We’ve seen all the different armed forces represented and it’s awesome. I’m honored to be invited as a judge; it’s great and I definitely won’t forget it.”

Service members from every military branch marched in the parade and greeted parade-goers with various treats including candy, fans and a spritz of water from a mini-submarine from Commander, Submarine Squadron 15 to break the heat of the day.

“To see the military community out here I think shows unity,” Pair said. “It shows that we’re here to support Guam and it’s just awesome.”

“They’re here to show that they support us and it does show that unity,” she said. “The show of military personnel in the parade is inspiring to all Guamanians. From the young kids to our retired veterans, we all have a military tie, so to see all the branches here in full force is wonderful.”

On July 21, 1944, Marines stormed the island’s beaches to recapture Guam from occupation under the hand of the Japanese Imperial Army. After weeks of fierce firefights, U.S. forces made their way to the northern part of the island where, on Aug. 10, the island was declared secure.