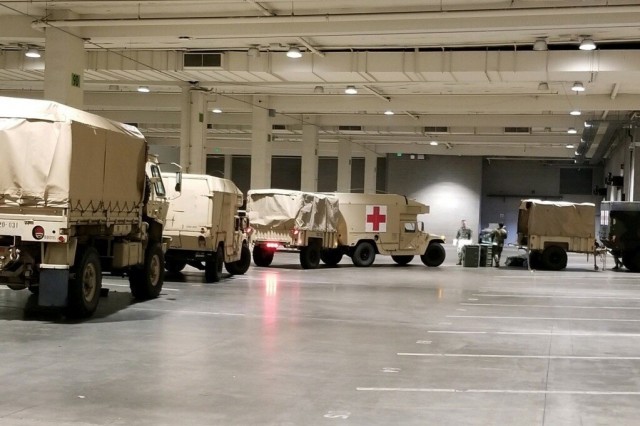 APRIL 3, 2020 – The Army is assembling a 250-bed field hospital at the CenturyLink Event Center in Seattle that’s meant to treat non-COVID-19 patients so area hospitals will be able to free up their own beds to care for those who have contracted the coronavirus disease, the commander of the 627th Hospital Center said.

“We have an important mission,” Army Col. Hope Williamson-Younce said during a telephone news conference with reporters at the Pentagon yesterday. “We are expeditionary, we’re agile, and we’re responsive. We have medical doctors, nurses and support staff from all over the world — they mobilized in a moment’s notice to support the American people.”

The field hospital, Williamson-Younce said, will relieve some of the burden on local hospitals, allowing them “freedom of maneuver” to better take care of patients who have COVID-19. “That is the best place for those patients to be — inside the fixed facility in a controlled environment,” she said.

Army Lt. Col. Jason Hughes, commander of the 10th Field Hospital, said his unit will be providing 148 beds to the facility, including 48 intensive care unit beds. The 10th Field Hospital also includes an emergency room, operating suites, a lab, a microbiology unit, blood banking capability, X-ray capability and services for mental and spiritual health. He described it as “a one-stop shop for your mind, body and soul.”

“These soldiers are excited to be here and do their mission,” Hughes said. “That’s why they signed up: to serve the nation, raise their right hand and come and serve the American people, whether that’s abroad or, in this case, at home.”

The field hospital is still being set up, and the expectation is that by next week it will be ready to take on patients, Hughes said.

While some of the 500 personnel assigned to the field hospital are busy constructing the facility, others are working closely with local officials to develop plans for determining what patients will come to the hospital and how they will get there, he said.

“While we’re building this hospital, we have the clinical teams integrated and discussing with the Department of Health here at Washington state and the local medical community to make sure that we do this the right way and the patients that come here get the care they deserve without compromising this facility,” he added.

Because the field hospital is to receive only non-COVID-19 patients, Williamson-Younce said, patients will be screened at both the referring hospitals and then again at the field hospital to ensure they are not afflicted with COVID-19.

Another challenge at the field hospital is providing for civilian patients the kind of experience they would get in a civilian hospital — which is understandably different from the kind of care service members would expect in a wartime environment.

“When we go to war, we set up on a field and we set up in tents,” Hughes said. “We construct a tent city, and we have beds that are close, near to each other. So [there are] privacy concerns that we have for civilian patients. We’re constructing barriers in between the beds that we wouldn’t normally have in a field setting.”

Hughes also said they are keeping in mind concerns about noise, such as that from power and oxygen generation systems, while setting up the hospital. While that kind of noise might be common around a field hospital at a forward operating base, he said, it would be unusual for civilians. The team is working to ensure civilians treated in the field hospital have “an experience commensurate with what they’d have in a local hospital,” he said.

Hughes said that while it’s likely that patients will begin arriving early next week, the numbers of patients coming to the field hospital is not yet known.

“Whether the hospitals offload patients to us immediately, that remains to be seen,” he said. “But we’ll be ready, whether they come or not. We’ll see what the local network can handle. But we’ll be ready to go early next week.”