You have spoken to the recruiter, you asked all of your questions, you chose your branch of service and now you are ready to enlist. After completing the required steps of the ASVAB, physical and background check, there is one more important step – signing the enlistment contract.

In all likelihood, you will not ship out on the day you sign your contract. Instead you will be given a future date that you will ship to basic training for your branch of service. Initially, you will sign a commitment contract that basically assigns you to inactive service until your ship date. You are not entitled to any pay or benefits under this contract. When you actually ship, you will sign your final enlistment contract, DD Form 4, Enlistment/Reenlistment Document – Armed Forces Of The United States. This is the one that counts. 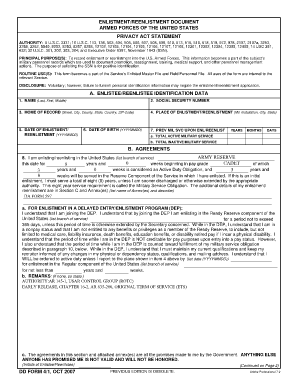 If it isn’t in the contract, it doesn’t exist.

Read that statement very carefully. It doesn’t matter what the recruiter said, what the clerk at MEPS said or what someone else promised you would occur. It only matters what is stated in your contract.

Unless everything you were promised is in your enlistment contract, do not sign the document. Once you have signed, it is a done deal and there is very little that can be done to change it.

In fact, when you sign you acknowledge that the contract is the binding agreement and any promises made to you not included in the contract are invalid.

There are certain benefits and incentives that are authorized by law and therefore do not have to be specified in the contract. This would include things such as the fact that you will receive base pay, be assigned housing and have access to medical care.

However, there are many other specifics that should be in your contract. Let’s review what you should look for before you sign (and please realize this is not a comprehensive list but the main components nearly everyone will have):

And once again, if it isn’t in the contract, it doesn’t exist. This statement really can’t be said enough.