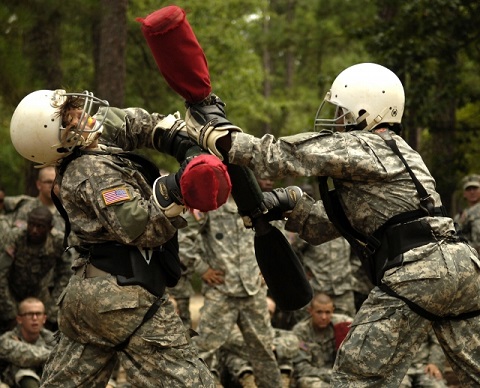 Basic Training The Journey for every Soldier starts here.

After you join the U.S. Army you will spend your first ten weeks in Basic Combat Training (BCT). Here you will begin your transition from civilian to Soldier. You will learn about seven key Army Values you wil be expected to live by, how to work together as a team and what it takes to succeed as a Soldier in the U.S. Army. Throughout the training, there is a consistant emphasis on the individual as part of a team ” working as one among many, for a greater goal. The entire process of Basic Training is divided into three phases known as red, white and blue. 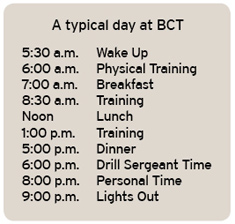 Red Phase – The Army makes sure every recruit is physically and mentally prepared to start Basic Combat Training.

You will undergo the Army Physical Fitness Test to help determine your physical aptitude (This test is routinely administered to Soldiers throughout their enlistment to ensure they remain in top physical condition).

Before moving on to the next phase, Soldiers must pass a knowledge and skills test.

White Phase – Recruits go through marksmanship and combat training and learn to rappel at the Warrior Tower. This training is intended not only to teach Soldiers valuable skills, but also to instill confidence.

This is the time you will learn basic rifle marksmanship. You will practice and qualify to use your weapon, the M-16A2 rifle. There will be field training exercises, a confidence-building obstacle course, a tactical foot march, and another knowledge and skills test to make sure you are preparred for the next step.

Blue Phase – After becoming familiar with the use of automatic weapons and hand grenades in U.S. Weapons Training, recruits put their training to the test as they negotiate the Night Infiltration Course. After passing all their tests and challenges, they congregate for Rites of Passage.

Contact a recruiter today!
Your last night of the exercise includes a return march to the unit area where you will attend a ceremony recognizing the team’s successful completion of the final stage in their transformation from civilian to Army Strong Soldier!
Other Useful Information: