All-Fours Run: Face downward, supporting the body on the hands and feet. Advance forward as fast as possible by moving the arms and legs forward in a coordinated way.

Bottoms-Up Walk: Take the front-leaning rest position, and move the feet toward the hands in short steps while keeping the knees locked. When the feet are as close to the hands as possible, walk forward on the hands to the front leaning- rest position.

Crab Walk: Assume a sitting position with the hips off the ground and hands and feet supporting the body’s weight. Walk forward, feet first.

The Engine: Stand with the arms straight and in front of the body. The arms should be parallel to the ground with the palms facing downward. While walking forward, bring the left knee upward to the left elbow. Return to the start position. Continuing to walk forward, touch the right knee to the right elbow. Recover to the start position. Be sure to keep the arms parallel to the ground throughout the entire exercise. 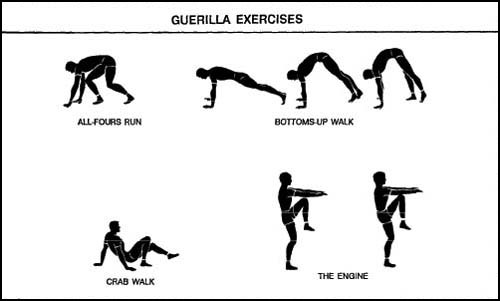 Double Time: Do a double-time run while maintaining the circle formation.

Broad Jump: Jump forward on both feet in a series of broad jumps. Swing the arms vigorously to help with the jumps.

Two-Man Carry: For two-man carries, soldiers are designated as number one (odd-numbered) and number two (even-numbered). A number-one and number two soldier work as partners.

Fireman’s Carry: Two soldiers do the carry. On command, number-two soldier bends at the waist, with feet apart in a balanced stance. Number-one soldier moves toward his partner. He places himself by his partner’s left shoulder and bends himself over his partner’s shoulders and back. When in position, number two soldier, with his left hand, reaches between his partner’s legs and grasps his left wrist. On command, they move forward until the command for changeover. They then change positions. The fireman’s carry can also be done from the other side.

Single-Shoulder Carry: Two soldiers do the carry. On command, number-two soldier bends at the waist with feet apart in a balanced stance. At the same time, number-one soldier moves toward his partner. He places his abdominal area onto his partner’s right or left shoulder and leans over. Number-two soldier puts his arms around the back of his partner’s knees and stands up. On command, they move forward until the command for changeover. They then change positions. 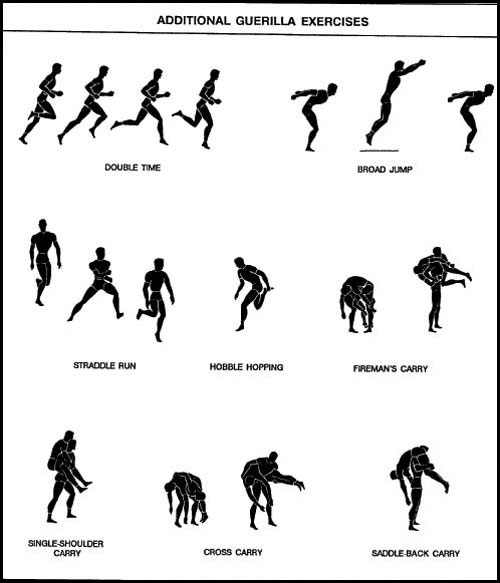