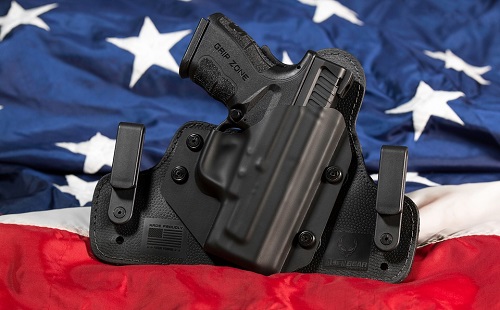 August 10, 2017, by Sam Bocetta – In 1883, Joseph Story said, “The right of a citizen to keep and bear arms has justly been considered the palladium of the liberties of a republic, since it offers a strong moral check against the usurpation and arbitrary power of rulers, and will generally, even if these are successful in the first instance, enable the people to resist and triumph over them.” But our right to bear arms isn’t just something that benefits the general public.

The Second Amendment is an amendment that is valued by many Americans, especially those patriotic individuals who serve their country by enlisting in active military duty. The US military has a rich history with firearms.

The Second Amendment enables our boys on the ground and our boys in the sky to neutralize threats to America’s safety and security. While in the military, recruits are trained in how to properly use and maintain a variety of weapons including handguns, rifles, etc.

Whether you are considering becoming an Army or Marine recruit or you are already serving our great country, it is important to familiarize yourself with the history of the Second Amendment. Not only will it serve you well in your military career but it is also a benefit to you when you are on leave or at home for good.

We, the People, owe a great debt to a brave and revolutionary gentleman named David Ramsay. In 1789, Ramsay called the American revolution a “people’s war.” Together with folks like John Adams, Ramsay sought to win one for the home team by way of forming an armed militia.

Today, we find ourselves at war all over again, this time with an even scarier enemy—a far-reaching web of faceless enemies, splinter cells, underground radicals and Fundamentalist extremists, some of whom walk among us in our very own homeland.

For this reason, our Second Amendment right is every bit as important, if not more so, as it was when it was first introduced.

Second Amendment History
This United States Constitution was ratified during December 1791. The key element of the second amendment dealing with U.S. citizens having the right to bear arms states:

“A well regulated Militia, being necessary to the security of a free State, the right of the people to keep and bear Arms, shall not be infringed.”

The proposal for the Constitution’s Second Amendment occurred shortly after the Constitution’s ratification. It was proposed by James Madison who viewed the amendment as a way to provide more support for a state’s militias. Today, a state militia is considered the National Guard.

Federalist Conflict
At the time of the Second Amendment being added to the U.S. Constitution, there was a conflict between Federalists. Some of them wanted to support the Constitution as it was ratified and others wanted the states to have more power.

One side interprets the amendment as providing collective rights. This opposing side believes it is meant to provide individual rights.

Collective Rights
These people believe in the collective-rights interpretation of the Second Amendment and feel it is designed to protect the rights of individual states to train and maintain a formal militia.

These militias should be used for protection against a federal government that has become oppressive.

They interpret the second amendment as only allowing those who are members of an official militia to legally have guns. They also believe the federal government is not permitted to eliminate a state militia.

Individual Rights
The other side of the argument interprets the second amendment as giving all citizens the right to own guns. Such ownership should not be affected by federal regulations.

It is designed for a citizen to have the ability to protect themselves when facing some type of danger or threat. They believe the clause concerning militias was not intended to limit a citizen’s right to bear arms.

They believe an American citizen has the right to carry a concealed gun in a gun holster on their person.

Organizations
Individuals on both sides of the Second Amendment debate have formed organizations to further their cause. Individuals who support gun ownership on an individual basis are supported by the National Rifle Association.

This other side who believes in stricter gun control is supported by the Brady Campaign and other anti-gun organizations. They believe restrictions should be placed on the availability of firearms, who can own them and more.

Supreme Court Cases
Many people have often debated the rights of a citizen to bear arms. This Supreme Court has tried to avoid the issue, but certain situations have made it necessary to address it.

Cases heard during the 1800s confirmed the court’s position that the Second Amendment does not stop a state from having its own rules on gun ownership. Later decisions supported an individual citizen’s right to bear arms.

United States v. Cruikshank
This case was about the Ku Klux Klan not permitting black citizens the right to bear arms and more. The Supreme Court ruled the right of individuals was not granted in the Constitution.

A decade later, the court ruled the Second Amendment limited the federal government’s ability to control gun ownership and not the states.

Miller v. Texas
In this case, the state of Texas was sued by Franklin Miller in 1894. At issue was Miller’s contention that he should be able to carry a concealed weapon despite Texas law stating he was not permitted. The Supreme Court ruled against Miller saying the Second Amendment does not apply to state laws.

The National Firearms Act (NFA) had been passed five years earlier and prohibited taking any type of firearms across state lines. Jack Miller and Frank Layton felt the NFA violated their rights under the Second Amendment.

The Supreme Court ruled against the two men. It stated the two men could not provide proof that taking their shotgun across state lines was part of being part of a well-regulated militia.

District of Columbia v. Heller
This case was decided by the Supreme Court in 2008. Dick Heller was a licensed special police officer in Washington D.C. He challenged the Washington D.C. ban on handguns.

This case was the first time in the history of the Supreme Court ruled individuals who are not part of a state militia had a right to bear arms even if it conflicted with state law.

The court wrote that an individual did have the right to have firearms even if it is not part of service in a militia. A citizen could use a firearm for lawful purposes including self-defense in their home and more.

McDonald v. City of Chicago
This case was heard by the Supreme Court in 2010. A private citizen challenged the city of Chicago’s ban on individuals being able to own private handguns.

It ruled as it had in the District of Columbia v. Heller case. It stated once again that the Second Amendment should be applied in the same way for states as well as the federal government.

The Second Amendment: a Fundamental Right in the USA
The right to bear arms is so fundamental even individuals opposed to individual citizens owning firearms will agree citizens do have the right to protect themselves.

The argument will continue concerning if a citizen’s ability to own and carry a firearm should be unfairly limited by the government. Physical violence is usually useless against an armed criminal and very ineffective against a state that has become tyrannical.

Both sides feel they have the moral high ground concerning the Second Amendment.

About the Author: Sam Bocetta is a retired contractor who worked for over 35 years as an engineer specializing in cyber warfare and Navy computer systems. Past projects include the development of EWTR systems, Antifragile EW project, and development of Chaff countermeasures. Sam now teaches at Algonquin Community College in Ottawa, Canada as a part time engineering professor. You can find more of Sam’s work here at gunnewsdaily.com