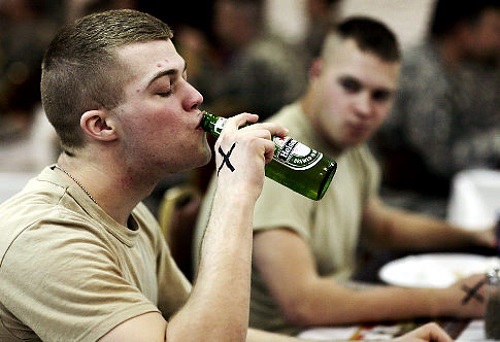 January 27, 2016, by Brooke Chaplan – Many years ago, military officers in all branches of the armed services were able to consume alcohol at any age. However, rules concerning alcohol within the military have significantly changed over the years. Several decades ago, a bill was passed that raised the minimum drinking age for all military personnel. As of right now, the legal drinking age for all military bases located in the United States is 21.

In other countries, the legal age for military officers to consume alcohol may differ. The drinking age in several European nations and other foreign countries is 18. Most American military bases located in other countries tend to obey that country’s alcohol laws. However, the commander of the U.S. military base has the overall say. If a commander wishes to uphold America’s drinking laws in another country, they have the power to do so.

In 2012, the Marine Corps’ limit for on-duty drinking standards were significantly lowered. In fact, one alcoholic beverage could cause a marine to land in hot water with his or her commander. Breathalyzers can be administered at random, and a result of only 0.01 percent would lead a soldier to counseling. The laws are so incredibly strict, and the punishment only increases with the amount of alcohol detected in a marine’s system.

The Marine Corps are not the only branch of the military that has set strict alcohol laws over the years. In fact, the Navy, Air Force, and Army do not allow an alcohol reading of 0.05. Failure to stay within the legal limits can lead to a dishonorable discharge. Furthermore, the government dismissal will stay on a soldier’s record forever, and just a couple of beers at dinner could ruin someone’s reputation for ever. According to DWI experts at Buford & Gonzalez in Austin, this is in contrast to the 2000 federal law which adopted a .08 limit in most all states for increased highway funding.

Not only are the alcohol limits ridiculously low for military officers, but all soldiers can be subjected to random breathalyzer tests. Some branches of the military even require commanders to administer mandatory breathalyzer tests daily. With drinking limit so low, it’s a wonder why any military officers would drink while on-duty in the first place. An honorable military career could potentially be ruined by just a few glasses of wine.