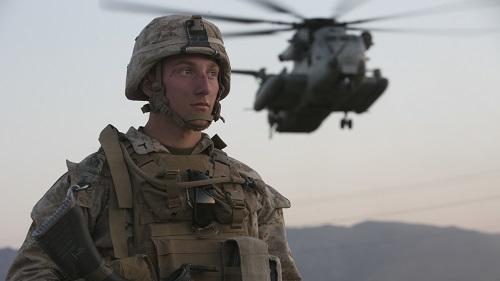 NEO exercises simulate real-life scenarios where non-combatants are evacuated from a potentially hostile area. MAWTS-1, based out of Marine Corps Air Station Yuma, Ariz., conducted the NEO exercise as part of Weapons and Tactics Instructor Course 2-17.

“Making the exercise as close to real life as possible helps prepare Marines, in the event they have to perform an evacuation like this,” said Sgt. Mark Eubanks, logistics team leader, Tactical Training Exercise Control Group.

The five-hour exercise afforded Marines a chance to practice the procedures of evacuating U.S. personnel and local civilians from a foreign country. The operation took advantage of the vertical take-off capabilities of aircraft such as the CH-53 ‘Super Stallion’ helicopter and the MV-22 ‘Osprey’ tilt-rotor aircraft.

As the aircraft landed, Marines of 2nd Battalion, 6th Marine Regiment and Combat Logistics Battalion 26, set up an evacuation control center and prepared role-players, acting as U.S. citizens, for evacuation.As the role-players finished going through the ECC, they were escorted to the aircraft and taken to MCAS Yuma.

The WTI course is used train Marines in advanced tactical aviation training to certify them as weapons and tactics instructors for their units. WTI is a seven-week course consisting of 18 academic training days followed by the flight phase which consists of 25 training days where they apply their skills within various scenarios.

Each weapons and tactics instructor averages more than 90 days every year providing support to their respective units including certification, standardization, and supplementary ground and airborne instruction.

“It’s good for the young guys to go through this training because all the ‘what ifs’ that could go through their head actually come to life,” Eubanks said. “Also, this type of real-life training gives a good platform for everyone for evaluation from us on what they did right and wrong at all levels and ranks. It’s better for them to learn their lessons here rather than in-country if or when they are ever called to do it for real.”