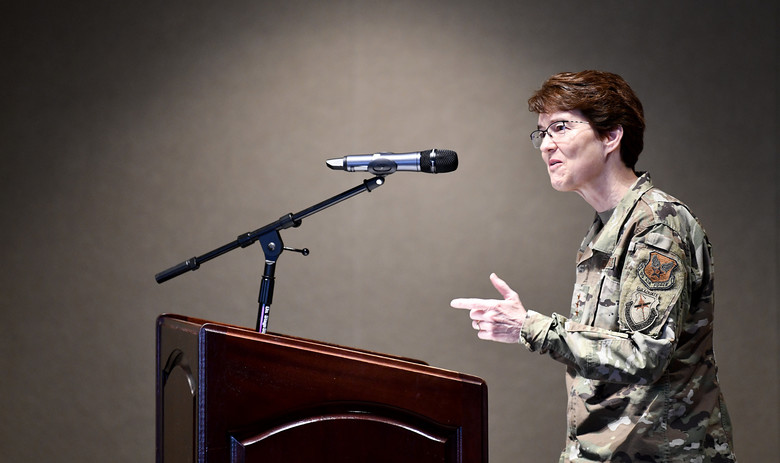 NOVEMBER 19, 2019 – The Air Force Materiel Command hosted its inaugural Women’s Leadership Symposium Nov. 13-14 with the theme of “Empower, Encourage and Embrace” to focus on women leadership and diversity in the workplace.

The two-day event drew more than 250 attendees from across the command. The symposium featured keynote speakers, issue-focused panels and collaborative networking discussions designed to empower women to help foster workplace environments that embrace diversity and promote leadership growth throughout the organization.

“We are the most diverse command in the United States Air Force, and the make-up of females in the military is much higher now than when I entered in 1984,” said Gen. Arnold W. Bunch Jr., AFMC commander, during opening remarks Nov. 13. “We need to make sure we give you opportunities to grow and develop, and we need to foster an environment where you can thrive in the workplace each and every day.”

While the Air Force is working diligently to address a number of initiatives focused on the needs of female warfighters, to include uniform fit, childcare, maternity issues and more, there is still a need to address those “hard” issues that often get overlooked in the workplace, said Maj. Julie Glover, symposium lead.

“There are so many important topics that our women who serve, both military and civilian, need to hear about,” Glover said. “They need a forum to voice their concerns without fear of reprisal. Our goal was to bring men and women together to review the concerns and learn how to work better together to create a more cohesive, ready force.”

Lt. Gen. Jacqueline Van Ovost, Headquarters Air Force director of staff, discussed several Air Force initiatives focused on talent management and development during a keynote address on day one of the event. She also spoke of challenges many women face as they move in greater numbers into leadership positions across the force and the need for all to be “courageous and confident” in who they are as they inspire future generations to serve as military and civilian Airmen.

“We all face similar struggles and challenges, and we need to reach out and support each other,” she said. “We should be open about the experiences that we have had and build on our networks. We must embrace who we are and encourage each other to reach our goals.”

“Get a mentor, be a mentor and build and value that network,” James said. “Put people first. If you don’t get the people part right, everything else crumbles down around you.”

The importance of continuous learning was also stressed by James during her presentation.

“Learn, evolve and reinvent,” she said. “Don’t rest on your competency laurels for too long. You need to keep on learning.”

In addition to the featured speakers throughout the symposium, participants had opportunities to interact with one another, senior AFMC and Air Force leaders. Participants also collaborated in breakout sessions with topics ranging from work and life balance to emotional intelligence, team development, the art of self-promotion and more. Panels on diversity and inclusion, effective collaboration and spouse teams drove discussions on common work and life issues and ways to break down barriers in communication to create workplace environments based on trust.

For AFMC intern Lindsay McNeely, one of the youngest attendees at the event, the symposium provided an eye-opening perspective on issues that might affect her as she grows in her civilian career.

“It’s cool to work in an organization that champions and supports women,” McNeely said. “It’s interesting to see how the world has changed, making it possible for so many women to be in leadership positions. It’s good to know that these opportunities are in front of me, and there are women already in them who can help guide the way.”

For Glover, the success of the event hinged strongly on the great participation and interaction of AFMC leaders and attendees on issues of relevance for the Air Force.

“All of the diverse ideas shared can help shape a better future not only for women, but for everyone,” she said. “This forum was a great opportunity to listen, learn and shape a better tomorrow.”