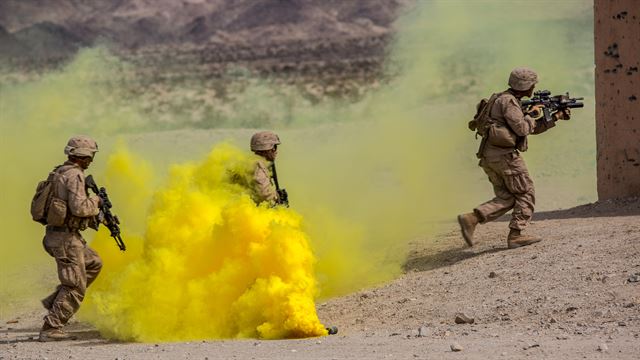 MARCH 29, 2016, MARINE CORPS AIR GROUND COMBAT CENTER, TWENTYNINE PALMS, Calif. – The MCCREE is a tool utilized by commanders to evaluate their unit’s combat readiness through either a single exercise or series of events. During their MCCREE, the battalion put B Co. to the test with a live-fire movement and an assault on Range 210.

“The first part of the MCCREE began with a force-on-force scenario,” said Capt. Charles H. Richardson, company commander, Company B, 3rd LAR. “We went up against a thinking enemy, composed of conventional and unconventional forces, tasked with defending an area.”

The Marines of Company C acted as the opposition during B Co.’s assault on Gay’s Pass training area. Over the first few days of the exercise, they challenged B Co. with a variety of scenarios ranging from notional improvised explosive devices to armed adversaries.

“The assault on Gay’s Pass gave us great insight on how to take on a thinking enemy and to adapt our plan to a changing battlefield,” Richardson said. “Within the company, we have 18 different military occupational specialties that allow us to conduct a wide array of operations. We can load everything up on our [light armored] vehicles and operate three to five days without much support due to our versatility.”

Upon completion of the first portion of MCCREE, the company moved on to a live-fire and maneuver exercise. Instead of living, breathing enemies, the Marines set their sights on targets and conducted an assault over open terrain.

“The second stage transitioned to live fire with movement to contact while fighting mechanized infantry before moving on to an assault on Range 210,” Richardson said. “We’re not always going to have the luxury of fighting in open terrain or be able to fight where the enemy is. Often times, the enemy is going to be in urban terrain so we have to prepare for that environment.”

The location of MCCREE’s culminating event, Range 210’s Military Operations in Urban Terrain facility, provided B Co.’s riflemen the opportunity to dismount from the vehicles and conduct building clearing operations. Targets, designed to fall when fired upon, gave the Marines the feeling of fighting a tangible enemy.

“At first, there were internal issues the Marines had to work through,” Sgt. Maj. Marcus A. Chestnut, battalion sergeant major, 3rd LAR. “It’s always interesting to see them come out here and overcome those issues. At the end of it, it all worked out and I think they did very well.”

Richardson also expressed satisfaction with the results throughout the evaluation exercise as well as confidence in the Marines combat readiness.

“We’ve gone through a lot to get where we are now,” Richardson said. “The Marines have come a long way and we’re a more cohesive fighting force because of it. As we are now, I’m fully confident that we can step down range and take on any enemy that we may encounter.”