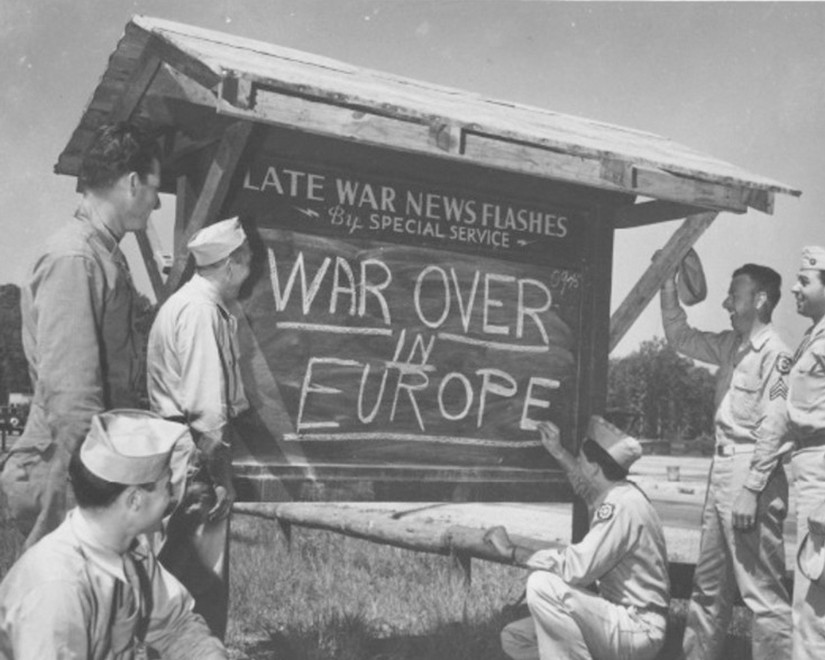 MAY 11, 2020 – President Donald J. Trump, Defense Secretary Dr. Mark T. Esper and Chairman of the Joint Chiefs of Staff Army Gen. Mark A. Milley commemorated the 75th anniversary of the Allies’ victory over Nazi Germany in Europe at the National World War II Memorial in Washington.

The president and wife Melania laid a wreath at the memorial at today’s event. They also toured the memorial and met veterans in attendance.

“Seventy-five years ago today, the last remnants of the Nazi regime unconditionally surrendered to the Allied Powers, marking the end of World War II in Europe,” Trump said in an official statement. “Today, we celebrate the forces of freedom who defeated tyranny and emerged victorious in that monumental struggle. We pay tribute to those who served for their service and pause to remember those who gave their last full measure in defense of the flames of liberty.”

When the U.S. entered the European conflict in 1941, war had been raging there for more than 14 months since Nazi Germany invaded Poland in September 1939. In Europe, the Americans joined with the United Kingdom, the Soviet Union and other nations to defeat the rise of fascist Germany.

“The campaign to end fascism in the European theater is a somber reminder of the price of freedom,” Trump’s statement reads. “More than 30 million lives were lost and tens of millions more were shattered in the war. Most of those who perished in Europe were civilians, including 6 million Jews and millions of others from Poland and the former Soviet Union.”

“Most of these selfless and heroic warriors had never known life in a prosperous America,” Trump said. “They grew up during the Great Depression, when America’s economic prospects seemed bleak. Yet, they answered our country’s call of duty because they believed in the principles that lie at the foundation of our nation … these American heroes would not relent in their noble efforts until they had liberated all of Europe from the abhorrent Nazi regime.”

The president said fewer than 400,000 of the 16 million Americans who served during World War II are still alive.

The United States joins other nations in celebrating V-E Day, the official surrender of Nazi Germany on May 8, 1945, marking the end of the war in Europe during World War II.

“Their generation — the Greatest Generation — will never be forgotten,” he said. “We are forever grateful for their immeasurable contributions to the success and prosperity of our nation.”

The fighting in Europe ended May 8, 1945 — Victory in Europe Day — when the Allies formally accepted Germany’s unconditional surrender, but World War II was not yet over. The fighting in the Pacific continued for another four months. It ended Sept. 2, 1945, when the Japanese signed an instrument of surrender aboard the USS Missouri.