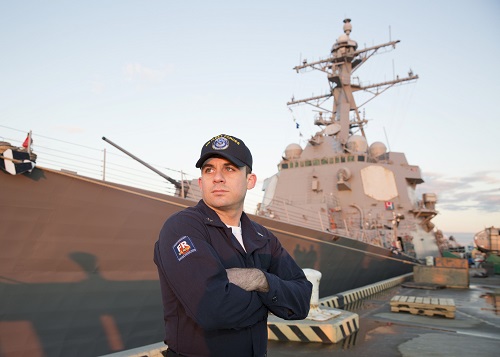 The approval came after a review of the results from recently completed afloat wear tests conducted aboard three deploying ships and involving more than 700 Sailors. The IFRV coveralls are intended to replace the Flame Resistant Variant (FRV) coveralls currently in use throughout the fleet.

“The IFRV was designed not only with the safety of our Sailors in mind, but also comfort and durability,” said Adm. Phil Davidson, commander, USFF. “We will always make safety a priority, but if we can also improve quality of life for our Sailors in doing so, then everyone wins.”

The original FRVs were introduced in response to widespread reports in which Sailors afloat were at risk because most of their required uniforms were not flame resistant. Given the potential safety concerns, USFF endeavored to develop and distribute the FRV as quickly as possible. In early 2015, recognizing the significant dissatisfaction with the original FRV, USFF partnered with Navy Exchange Service Command (NEXCOM) and the Navy Clothing and Textile Research Facility (NCTRF) to develop an improved version which is more comfortable, durable, and as safe or safer than the original.

The result was an IFRV coverall made from a flame resistant, tri-fiber blend. It weighs significantly less than the current FRV fabrics and provides improved moisture management by allowing the fiber to breathe more efficiently. This IFRV coverall also offers arc flash protection, a notable upgrade in safety from the current FRV. The IFRV coverall is also designed to last nearly twice as long as the FRV.

“Shipboard wearability and functionality was of extreme importance with the development of the IFRV,” said Davidson. “We weren’t going to introduce something new without thorough testing afloat to ensure it meets the needs of our Sailors and was indeed an improvement over the original FRV.”

USFF conducted coverall wear tests aboard three ships, amphibious assault ship USS Kearsarge (LHD 3), guided-missile destroyer USS Carney (DDG 64), and fast-attack submarine USS Newport News (SSN 750) during their recent deployments. Both a flight suit and traditional version were tested, with surveys taken both mid- and post-deployment. The results were overwhelmingly positive for the IFRV and favorable toward the traditional version of the coverall. In summary, 89 percent of respondents thought the IFRV looked better than the FRV; 86 percent thought it was more durable; 91 percent said it was more comfortable; and 85 percent thought it was cooler in hot climates. Overall, 91 percent of Sailors involved in the test thought the IFRV traditional coverall was an improvement over the FRV and 68 percent thought the same for the flight suit version. A data-driven decision was made to select the traditional coverall as the replacement for the FRV.

Like any other organizational clothing item, Sailors can expect to have their current FRV replaced by the ship over time at no additional cost to them. USFF is teaming up with NEXCOM and Defense Logistics Agency to introduce the IFRV coveralls to the fleet. The Navy’s transition from the FRV to the IFRV coveralls is expected to take place after October. Additional guidance on a finalized roll-out plan, along with instructions on manner and occasion of wear, will be provided at a later date.

Focus groups held during IFRV testing and the post-test surveys also revealed a desire among Sailors for a two-piece FR variant which can be worn at sea, in port, and off base to reduce the number of daily clothing changes. This data and feedback is informing a collaborative effort with NCTRF to prototype a more professional and modern two-piece variant with layering options to allow for de-blousing for certain evolutions and in hotter environments. Under layers may include flame resistant and drifire-style moisture wicking jerseys. The goal is to explore a two-piece variant that is sufficiently versatile to address the requirements of all afloat communities. To ensure Sailor feedback is incorporated to the maximum extent possible, these concepts and associated design features are being reviewed by focus groups in fleet concentration areas this month.