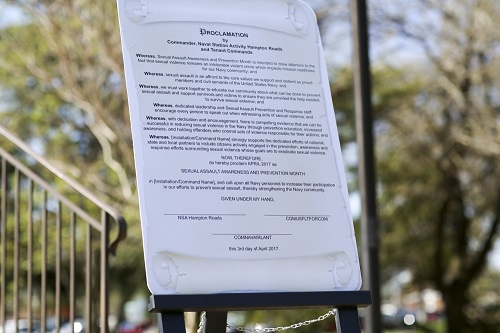 The event was coordinated by the USFF SAPR victim advocates and marked the beginning of this month’s activities. Navy leaders designated April’s theme to be “Protecting Our People Protects Our Mission.”

Sailors and civilian guests gathered at the Prisoner of War/Missing in Action (POW/MIA) Park at NSA Hampton Roads to kick off the event. The crowd formed to hear opening remarks from the USFF SAPR Officer’s, Capt. Charles Marks.

“Sexual assault awareness month is one of those opportunities when we can take a moment out of work and assess what we’re doing, acknowledge what we’ve done and focus on what we still need to do,” said Marks. “The Navy works and fights in small teams and sexual assault and other destructive behaviors erode and undermine those teams. We cannot be effective in mission readiness if team mates don’t trust each other.”

Chief Information Systems Technician Latoya Glover, one of the event’s coordinators, expressed that the Proclamation Kickoff is just the beginning of the USFF SAPR observance. With serval other events scheduled this month, such as a SAPR Teal Ribbon 5k run and the USFF Walk-A-Mile in Their Shoes event, where participants will walk to various stations on the base to learn about different forms of support available to victims of sexual assault, committee members are hoping to get Sailors involved.

“Every service member, from the newest recruit to flag officers must know, understand and adhere to Navy core values and standards of behavior to eliminate sexual assault,” said Glover. “Each member of our Navy has a unique role in preventing and responding to sexual assault and I think the events that we are hosting throughout April will provide a great opportunity to raise awareness and promote prevention of sexual assault.”

USFF has also scheduled eight command-wide mandatory SAPR training sessions throughout the month of April. The training session will focus on prevention techniques such as bystander intervention, reporting, victim support and advocacy.

According to Department of Defense (DoD) sexual assault statistics, in recent years reporting of sexual assaults across the DOD has decreased and some leaders believe this may be in response to SAPR training and awareness.

“People are reporting and while we wish we could eliminate this crime completely, I believe that more people are informed, reporting and doing their part to get these criminals locked away and out of our ranks,” said Yeoman 1st Class Kelly Goss, a SAPR victim advocate at USFF. “Prevention and elimination of sexual assault through awareness and training is our goal here.”