TONGATAPU ISLAND, Tonga – September 21, 2015 — The sun reaches its zenith as U.S. Marines and their partner-nation soldiers go on day-long patrols, wading through chest-high rivers, impassable marshes and dense tropical vegetation. Their objectives lie in distance, promising to be safe havens as long as they keep a 360-degree security setup while they patrol and keep constant vigilance.

Each force split into the integrated platoons for the training that comprised of patrolling, land navigation and devising attack strategies to engage an unknown mock enemy, according to Adamski.

Leading up to the final event, the different militaries hosted classes and demonstrations to exchange each other’s battle drills, standard operating procedures and capabilities. The final operation that brought the multilateral forces together proved a practical application for the learned lessons.

The troops were able to take all of those fundamentals and apply them in a tactical environment against a thinking enemy in platoon-level engagements, said Adamski.

The culminating event tested their level of interoperability and the skills necessary to devise and carry out the tactical plans. After the individual engagements, the integrated platoons came together to conduct a combined company-level attack against a platoon-sized defensive position.

“The goal of our training here with multiple classes and events conducted was to simply train with allied forces regardless of the type of training,” said Adamski. “It’s vital that we know our allies in all aspects of training.”

Throughout Exercise Tafakula 15, the Marines had the opportunity to learn and experience new tactics, building on individual and group skills.

“There were plenty of benefits that we were able to take away from this exercise,” said Staff Sgt. Sergio Zacarias, a platoon sergeant with Company B, 1st Battalion, 4th Marines, MRF-D. “The Marines and [other] troops were able to learn each other’s tactics and experience each other’s points of view and approaches to training. These types of training opportunities better prepare us for future integrated training events with foreign militaries.”

In addition to the military training, the Marines contributed to school clean-ups and other constructive projects. They immersed themselves in the local culture, engaged with their hosts and contributed socially and economically to local communities.

“It was great to be afforded the opportunity to travel to a different country and experience its culture. Not only did we help our coalition partners but we we’re also able to effect the community as well by helping paint small schools and build playgrounds,” said Zacarias. “The people were really grateful for our presence there and we enjoyed our time while it lasted.”

The rotational deployment of U.S. Marines in Darwin affords unprecedented combined training opportunities such as Exercise Tafakula and improves interoperability between the forces involved. 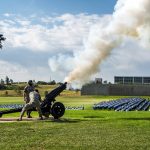