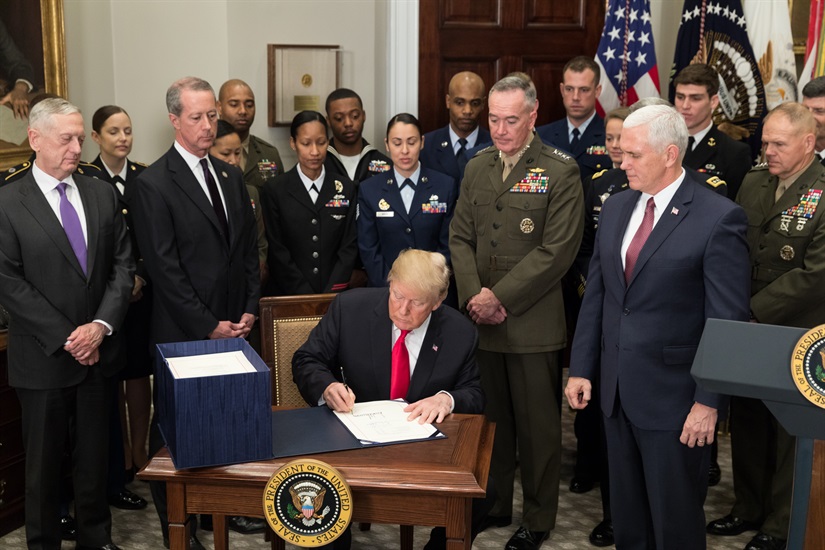 The act calls for $626 billion for the department’s base budget and another $66 billion for operations. The act includes a 2.4 percent pay raise for military personnel.

The act authorizes the department to spend money, but the appropriations bill — which actually provides the funds — is still in Congress.

U.S. Military: ‘Greatest Fighting Force’
“This historic legislation demonstrates our unwavering commitment to our men and women in uniform — the greatest fighting force in the history of the world — and we’re making it a lot better than even that,” Trump said before signing the bill.

The president said the legislation “represents a momentous step toward rebuilding our military and securing the future for our children.”

Trump added, “In recent years, our military has undergone a series of deep budget cuts that have severely impacted our readiness, shrunk our capabilities and placed substantial burdens on our warfighters. History teaches us that when you weaken your defenses, you invite aggression.”

The president recalled George Washington’s belief, that to be prepared for war is one of the most effective means of preserving peace.

“With the signing of this defense bill, we accelerate the process of fully restoring America’s military might,” Trump said. “This legislation will enhance our readiness … and modernize our forces and help provide our service members with the tools that they need to fight and to win.”

Defeating ISIS
The act authorizes funding for the continued campaign to defeat the Islamic State of Iraq and Syria, Trump said. “As you know, we’ve won in Syria, we’ve won in Iraq,” the president said. “But they spread to other areas and we’re getting them as fast as they spread.”

The act also improves missile defense capabilities in face of the danger from North Korea, the president said. The act also upgrades the Army and Marine Corps ground combat vehicles, allows for the purchase of new Joint Strike Fighter aircraft and paves the way for Virginia-class submarines.

“Finally, the defense bill authorizes major investments in our military’s greatest weapon of all: its warriors,” he said. “The NDAA increases the size of the American armed forces for the first time in seven years, and it provides our military service members with their largest pay increase in eight years.”

The president called on Congress to complete the job by eliminating sequestration and passing the appropriations bill.

“We must work across party lines to give our heroic troops the equipment, resources and support that they have earned a thousand times over,” he said. “Together, we will send a clear message to our allies and a firm warning to our enemies and adversaries: America is strong, proud, determined, and ready.”