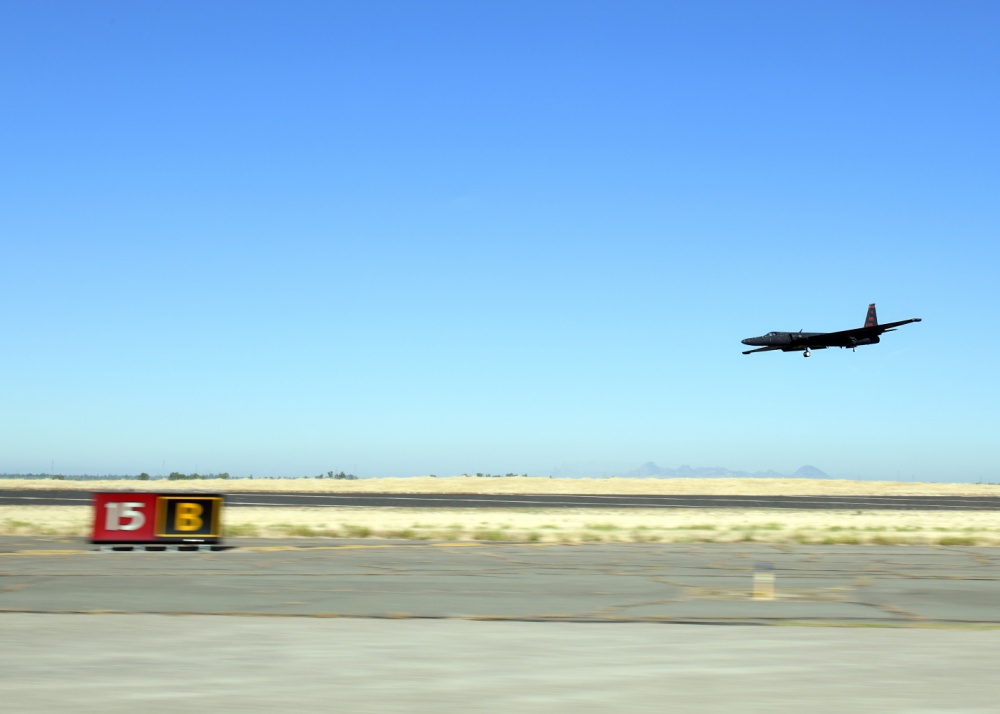 Currently, Huggins is working with two other civilian U-2 instructors. Together they have over 7,000 hours of U-2 flight time and over 45 years in the U-2 program. They use their experience to train the nation’s next fleet of U-2 pilots.

“As a civilian instructor pilot, I’m focused on working with the newest U-2 trainees, and getting them proficient at the basics of flying the U-2,” Huggins said. “That includes a lot of briefings where we will talk about ‘techniques’ and things you learn after flying the U-2 for a long time, but that aren’t necessarily found written anywhere. It’s ‘the early building blocks’ I’m working on… but in the U-2, that can be pretty challenging.”

The U-2 Dragon Lady is widely accepted as the most difficult aircraft in the world to fly. The bicycle-type landing gear and low-altitude handling characteristics of the U-2 require precise control inputs during landing. Additionally, pilots have limited forward visibility due to the extended aircraft nose combined with the slight upward tilt of the aircraft. Only about 16 new pilots come into the U-2 program each year.

“It’s different for everyone,” Huggins said. “I’ve flown with applicants that hated flying the U-2 and opted to stop the interview process because they had no desire to do it again after their interview flight. It’s an extremely physical aircraft to fly, and it takes quite a while to get to the point where you feel like you’re flying it well.”

Civilian U-2 instructor pilots don an orange flight suit, symbolic to the history of U-2 pilots.

“Up until the mid-1980s, the U-2 pilots at Beale wore orange flight suits,” Huggins said. “As there is a lot of history and esprit de corps in the U-2 community, the 1st Reconnaissance Squadron commander was interested in bringing back the heritage of the orange bags. He ran it up the flagpole, and the upper echelon of leadership supported the idea.”

Since the U-2’s first flight on August 1, 1955, it continues to provide high-altitude, all-weather surveillance and reconnaissance in direct support of U.S. national objectives.

“I won’t get to fly it again on classified missions, but being able to take all of the lessons that I’ve learned over almost three decades of flying as a military pilot, and being able to teach those lessons and techniques to the new U-2 pilots that want to work so hard and succeed… that is very satisfying.”

“It’s been 2,133 days since I last flew the U-2 solo,” said Huggins. “I missed it. The fact I’m getting to come work here again, with the people I love to work with, in a jet and mission I love to be involved with… well, it’s just a dream come true.”