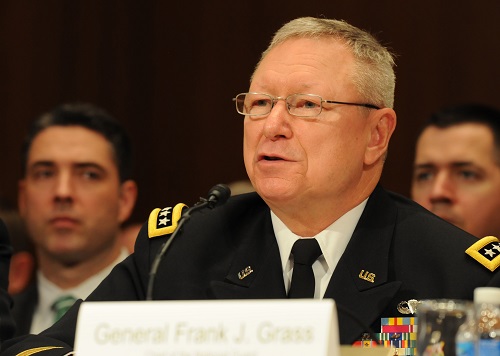 MARCH 24, 2016, WASHINGTON – The Army, Army National Guard and Army Reserve are working together well to assess recommendations from a national commission on the service’s future and fully implement the Army’s Total Force Policy.

That was one of the key points to emerge from a Senate Appropriations Subcommittee on Defense hearing here Thursday.

Senators also heard how the National Guard’s mission triad – fighting America’s wars, securing the homeland and building partnerships – combines to ensure a force that’s always ready, always there. And they heard from Army Gen. Frank Grass, the chief of the National Guard Bureau, which programs are critical to the Guard’s effectiveness during turbulent fiscal times marked by unprecedented security challenges at home and abroad.

Grass and other senior leaders also told senators that current force sizes are minimally sufficient to meet the nation’s challenges, echoing other Department of Defense leaders in similar hearings earlier this year.

“Similar to the collaborative effort that followed the Air Force Commission report in 2014, we are working diligently as a Total Army to build the strongest ground force possible for the nation,” Grass told senators. “I would like to offer my sincere appreciation to Acting Secretary (of the Army Patrick) Murphy, and to (Chief of Staff of the Army) General Mark Milley for their incredible leadership in this transformative process.”

The Congressionally mandated National Commission on the Future of the Army released recommendations on how the Army should best organize and employ the Total Force in a time of declining resources Jan. 28, after a year of fact-finding and discussion. The Air Force followed a similar process in 2014.

“The Army National Guard’s relationship with the Army is strong and enduring,” Army Lt. Gen. Timothy Kadavy, the director of the Army Guard, told senators. “Soldiers from all three components are continuing to work side-by-side in exercises and operations around the globe.”

As the primary combat reserve, the National Guard provides trained and ready forces to the Army and the Air Force – and the Guard’s combat mission informs their homeland and partnership missions, senators heard.

“The experience and capabilities gained from our federal mission, along with the equipment and leadership skills utilized overseas, yields a highly responsive National Guard here in the homeland, with roughly 4,000 Citizen-Soldiers and –Airmen on duty each day,” Grass said.

“The success of our warfight and our homeland mission are directly linked to our incredible and enduring partnerships with international, federal, state and local partners,” Grass said.

The National Guard State Partnership Program is one of those partnerships – and one of five programs Grass called key to the Guard’s continued success.

“Our successful State Partnership Program has established enduring partnerships with 76 partners/countries and continues to provide these forces in coalition operations worldwide and have improved their own interoperability with U.S. forces,” he said.

Echoing earlier testimony from Gen. Milley and other Defense Department senior leaders, Grass said force sizes are at the minimum needed to ensure the nation’s security.

The Army Guard director emphasized the chief’s point. “I agree with General Milley that this places us at the edge of being able to meet the current strategy,” Lt. Gen. Kadavy said.

And the chief of the National Guard Bureau sounded a warning: “If we return to sequestered levels of funding, the National Guard will be the smallest that it’s been since the Korean War – and at a time the population of the United States has doubled.”

Sequestration is automatic spending cuts – an austerity measure – in specific categories, including defense, stemming from the Budget Control Act of 2011. Grass’ warning echoes those of other members of the Joint Chiefs of Staff and other senior military and civilian leaders repeatedly made over the last five years.

The Army Guard director called the readiness of that force his top concern.

“When it comes to the Army National Guard, readiness for combat also translates into readiness for missions at home,” Kadavy said.

“We must ensure the men and women of the Air National Guard have the support they need as they balance civilian careers, family responsibilities, domestic response needs and their growing responsibilities to national security,” he said. “We must make sure our Guard Airmen and their families have access to spiritual, psychological and medical support they may need.”

The hearing about the posture of The National Guard and Reserves was part of a series of annual updates to legislators typically given by all the services and combatant commanders in House and Senate hearings here each spring.