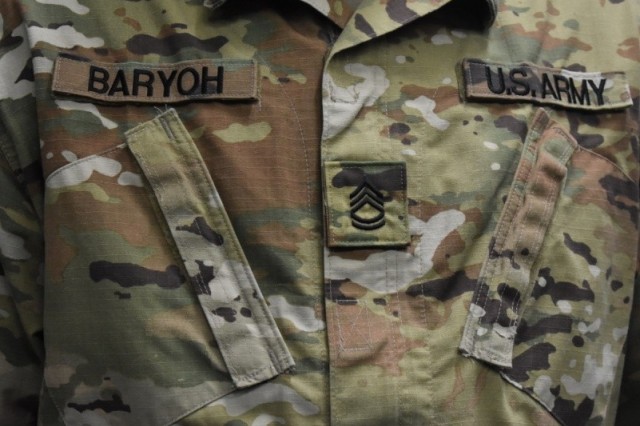 NOVEMBER 25, 2020 – The Army plans to adjust how it promotes its noncommissioned officers that could impact Soldiers who are serving in combat, starting a family, or attending the non-resident Sergeants Major Course, said the Army’s top enlisted Soldier.

Starting Jan. 1, NCOs unable to complete the required professional military education, or PME, courses may qualify to be temporarily promoted from sergeant through sergeant major, said Sgt. Maj. of the Army Michael A. Grinston during a media briefing Monday.

The temporary promotions aim to help an array of Soldiers who are either deployed, are pregnant or during postpartum, or attending the non-resident Sergeants Major Couse, Grinston said.

The promotions include both the pay and benefits expected from ranking up and will be in place until the rank is either permanent or expires, whichever comes first, he said.

The new policy will impact NCOs across the board, with changes starting in the January promotion cycle for all Army components.

Depending on the component, the fine print is different. For example, Army Reserve and National Guard Soldiers must already be selected for or serving in the next higher-graded position vacancy to qualify.

All Soldiers, regardless of component, must also meet or exceed the cutoff score and sequence number for their respective ranks, according to a memo signed by Lt. Gen. Gary M. Brito, the Army’s G-1. In addition, they must be next in line on an approved order of merit list during fiscal year 2021.

Temporary promotions for NCOs slated to begin next year
“With this new temporary promotion [policy], we have the ability to have Soldiers starting a family being given the opportunity to be promoted with their peers and still get their professional military education after they complete their post-partum profile,” said Sgt. Maj. Mark Clark, the G-1 sergeant major.

Before the new policy, deployed Soldiers often had to request time-consuming exceptions to be considered for promotion without the required PME.

“This new policy doesn’t make [temporary promotions] an exception — it makes it a standard,” Grinston said. “Those Soldiers, who are otherwise fully qualified, will be temporarily promoted with their peers. Everything will be streamlined.”

To understand the scope, around 300 deployment-related exceptions were approved in 2019, Clark said. But under the new policy, deployed Soldiers are no longer forced to deal with paper shuffling that may keep them from being promoted.

Those few hundred requests are based on a smaller operational tempo overseas. If the ops tempo grew back up to 100,000 or so deployed troops, Grinston said, “the requests for deployment-based promotions would be a lot higher.”

For pregnancy and post-partum circumstances, no such requests existed before.

In addition to deployments and pregnancy-related profiles, the policy also benefits senior NCOs enrolled in the non-resident Sergeants Major Academy, Grinston said. “So now non-resident master sergeants won’t have to wait to be promoted with their peers.”

Under the new policy, temporary promotions for senior NCOs will be based on non-resident course enrollment through graduation, following graduation of the resident course, to ensure they are eligible for promotion alongside their peers.

This will allow non-resident master sergeants to complete their course, while remaining eligible for promotion.

If a Soldier promoted with a temporary promotion is unable to attain their PME, like the Basic Leader Course, by the specified date indicated on their promotion order by either not attending or failing altogether, then they will be reduced to their former grade, he said.

If a Soldier is reduced to their previous grade, it doesn’t mean they will owe all the pay netted during their temporary promotion, Clark said. Their former rank will be restored with their original date of rank and effective date.

The updated policy is consistent with previously established changes for deployed Soldiers in the sergeant first class and master sergeant ranks, who, like with the latest changes, can be promoted if fully qualified on a fiscal 2021 order of merit list but lack the required PME.

Although the change comes amid an increasing number of new recruits, the SMA said, the change is less about keeping pace with a growing Army and more in-line with its top priority of placing people first.

At the end of the day, Grinston said, the temporary promotions are another way to “have the policies in place to allow our people to progress” through the ranks.